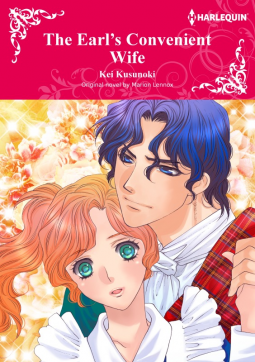 So, it took me a few tries to understand how the blurb worked and what it was saying, very confusing, or I am just so stressed out that reading comprehension is fading away. 😛 Either way, I was curious to see how this one would go. Would Jeanie and Alasdair (what a name) find happiness (well, given this is a Harlequin Manga the answer is yes, but I wanted to know the hows). Of course, it wasn’t really new, I have read quite a few Harlequin Manga the past months and I have seen the let’s marry for a year due to reasons quite a few times. Also… by now I can easily see when plot twists are coming. 😛

Eileen: “No way! It’ll be my third marriage.” Hold on hold on. Third? So, I know one of them died, but what happened to the other guy? Do I have to worry for Alasdair now? 😛 Sorry, she seems so young, and I am wondering how someone so young got married twice already and is now on the way to her third. Well, we find out what happened to Jeanie’s other husband. I now worry even further for Alasdair, even though I don’t like him.

snorts How appropriate, his last name (and hers then as she is in the family) is McBride. Sorry, am I the only one finding that funny?

Dang, Alasdair is such a freaking asshole. Bleh. I don’t like him. I get that he is pissed but he totally got angry at her for having married a cousin he doesn’t like. Dude, just because you don’t like your cousin, doesn’t mean you have to hate the girl. She seems so nice. So I am glad that she turned around and practically give him the middle finger. GO girl.

“She must be obsessed with money if she was married to my cousin.” Really? She can have many reasons, but she doesn’t seem to be the kind of girl who would go for the money.

I loved how the conversation between them regarding marriage was at first turning towards what he liked, but then she just flipped around the table and left him stunned. I so love this girl. She is feisty and has spirit.

After she slapped him. “When did I say anything to deserve being treated this way?” Um, dude, you have been criticising her the WHOLE time. Accusing her of being a money-hungry person who would do anything for money, I am sorry, you deserved and more. I would have cheered for her if she had also kicked you in the nuts. 😐

Ah, there we go, creepy stalking. Instead of just going to find out about things himself he lets someone else check out on Jeanie. sighs I can’t imagine that being very legal.

But thankfully they had a good talk about things, and I am glad to see another side to Alasdair. Still, I am not a fan of the guy. Judgemental prick. 😐 Plus I did think he was trying a bit TOO hard. Yes, it was cute that he did all that for her, but sorry it just felt like he was compensating. He never gave her some room.

snorts“My Scottish cakes are a secret family recipe.”
“You won’t show me?”
*Her looking doubtful. “I guess you’re family, depending on how we look at it.”

sighsThat part came out of nowhere for me. There is no spark whatsoever. But oh well, it came at the right point in the story again, and now the drama will probably start. That always happens when there is around 30 pages left.

And for once I wasn’t looking forward to the ending. Yes, the story is over, but I would have liked to see a x months after to see if they are still truly together after those months of contract, and yes I was seeing some sparks between them, but still not a lot. That I also why I wanted some more time. But I am happy that these two found each other, and I hope this third marriage will be a better one for Jeanie.

I did like the art, for most of the time, not always.

So yeah, not that interesting, frustrating characters, not that much romance/sparks, so yeah. I can’t rate this one very high. Sorry.