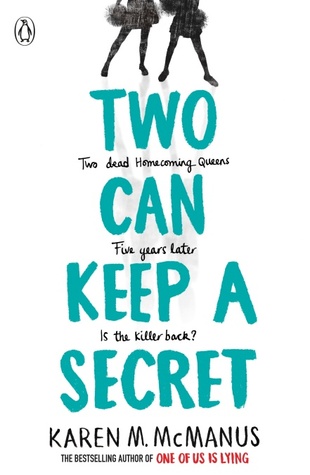 What kind of secrets is Echo Ridge keeping?

I am really fried after a whole busy week so I will make this one a good/bad review as I still want to review this AMAZING book!

Good:
*The whodunnit? Hot dang, I didn’t see that person coming. I had like tons and tons of suspects, every time we got a new twist I had a new suspect and at times I could also cross one off from my list, but I never had expected the murderer, the culprit to be that person. And what a pervert that person is. Ewww. I am sure others, when they find out about the whodunnit will also go ewww. 😛
*Echo Ridge. The town seems so cute and quaint… until you see various things that happen under the surface. Everyone knows everyone, nothing can be hidden. I loved how the author wrote this little town, showed us how tightly knit the community was, how there weren’t (or maybe one or two) any big franchise shops, how pretty much the only job for teens was that theme park, Fright Farm.
*The ending was just amazing. I thought that we had had all the excitement, that all the suspense and fear was now over, but then the author ends it with THAT sentence, and oh boy, I just couldn’t stop going: WHAT. WHAT. NOOOO. OMG. You can’t end it like that!
*Malcolm. He was such a sweet guy, though his past wasn’t easy with a brother who was accused of murdering Lacey. I loved that we see him find out things about his brother. About Lacey. About everything that happened in the past during/before Lacey’s murder. We see his perception change, and it was interesting to see how he handled this new truth.
*Malcolm x Ellery. I was rooting for them to get together. They would make such a cute couple, and I loved how easy their relationship was. How they could both talk to each other, and how Malcolm didn’t mind Ellery’s crime obsession.
*The threats. They made the book a whole lot more suspenseful. I was curious who was behind them. Was it someone we knew? Was it the murderer? Was it just a person having fun and trying to get back to people? I was quite shocked when we did find out who it was. I hadn’t expected that person to be the culprit. Dang.
*The twists and turns. Every time you think the story is going one direction we would suddenly turn around and find us on another road. I couldn’t wait for each twist and turn and the author really wrote them well. She kept me on my toes, never take anything for granted in this book.
*Finding out what happened to Sadie, why she went down this bad road, what happened so many years ago. After hearing all that she said, I can imagine she went down this road. I do hope that she is able to get all the help she needs.
*Ezra and Ellerly (love their names). The twins who move to Echo Ridge, whose mom was the girl who lost her twin sister so many years ago. We mostly learn about Ellerly as she is one of the main characters. Who their father was, and how they found out? Well, that is awkward, but I am happy that they finally had the chance to figure out those things.
*Fright Farm, or Murderland. Despite the gruesome thing that happened many years ago, I still would have loved to visit this place. I did think the older name is much better, but I can imagine it wasn’t a good idea to keep it given the circumstances.
*Various other side-characters, like Mia or Daisy. They definitely deserve to be mentioned as I loved seeing them pop up in the story, discovering what made them tick.
*The title. We went from One to Two, so that makes me wonder if this author’s next book will feature Three?
*Dual POV. Both of them have a connection to what is going on in the town. Ellery is the daughter of Sadie who lost her twin sister so many years ago. Malcolm was there when Lacey was murdered, and it was his brother that was accused of the murder.

Well, there was only one thing I liked less in this whole story… and that was Ellerly’s obsession with crime. We do find out why she is so obsessed, so I can kind of understand it, but still I wasn’t happy with it. She kept accusing people, being paranoid about everything and anything, making up some outlandish bullpoop theory that hurt several people. Maybe I could forgive it a bit further if she was actually right for once, but she was just bumbling and stumbling around pointing her finger left and right. It was actually embarrassing.

Oh yes, and given the blurb I had expected a bit more murder.

I can’t wait to see what Karen M McManus newest book will be. And I would recommend this book to everyone, you will fly through this book as you want to know more about the case, about the murders, about whodunnit.

2 thoughts on “Review for Two Can Keep A Secret”