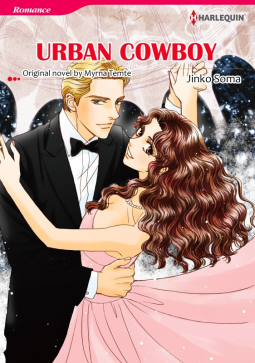 Welcome to book 2 in the Harlequin Manga Party Part 3! 😛 This time a friendship taking a new step, romance time, and I am curious to see if these two will get together, though I should say I am mostly curious to how it will happen, as we already know they will get together and have a happy ending.

He could have expected that answer, of course she would have loved to become an actress.. but she had a baby girl and she needs to provide and care for her. Being an actress is generally not a stable job, plus you may make long long hours. I am at least glad that she can still do acting and is also a coach. That is very nice. We do, a few pages further, learn further reasons why she dropped her dream of being an actress. Wow, dang. I am glad Nolan is supporting her, even offering his help as a lawyer should her parents come threaten to take her child away. I am glad that this gave her a chance, a new shot, at becoming an actress, for her to finally fulfil her dream. Though I do wonder why it took Nolan so long to tell her this, and for her to talk to him about it. I mean, they have been friends for years now, I would expect it to have come up sooner than now.

Awwww! Nolan: “I didn’t want to jeopardise our friendship, that why I couldn’t. At least up until now. Alex… I’m ready to start a romantic relationship with you anytime… whenever you are ready.” Kind of awkward but still adorable, and I love that he is giving her time. Though it was a bit too fast for me. I mean, he just confessed. And it feels like it was mere days later that she started to actually date him. I had expected a bit more development and not bang, 27 pages in and they are dating. Ah, there is the drama. Just 8 pages later and with their kids going bonkers about their relationship they are doubting it. Wow. That was fast. I can imagine that you don’t want to stress the kids, but you guys also deserve happiness. You can just talk to those kids and tell them honestly how you feel and how new this relationship is. Oh, but no worries, 13 pages later and they are having sex. Oh my. More sex, and suddenly he proposes? Um, I thought we were going to take it easy? I know you have been in love with her for 5 years, but that doesn’t really count to me, first see if a relationship really works before you get married. And why the hell do you tell the kids that you proposed/getting married. She told you no, she wanted to wait. Now there is more pressure. 😐 And then he gets pissy when she tries to explain and even tell her that she still has responsibilities as if she doesn’t know that. Also, you can’t have a relationship that you can’t explain? I am sure your boy understands that you are boyfriend/girlfriend. Just because you have kids doesn’t mean you need to get hitched immediately. Wow, classy boy. Classy. Awww, are you jealous, aww poor little Nolan. Can’t have any faith in himself or the girl he loves. What a prick. “If Alex really loved me, she should have been able to say yes right away.” What the actual fuck Nolan, what the actual fuck. So if a girl is hesitant she doesn’t love you? What the hell. flips a table snorts And one conversation with a friend and he understands? Wow…. Harlequin magics right there.

Haha, Nolan’s son says this: “My dad should propose to her, you know. What has he been doing for the past five years?”

I also don’t get why Alex’s daughter is so pissy at her mom. Do you not want her to follow her dreams? To be a bit more than just a coach and a teacher? I get that you don’t want to move, but come on, who mentioned moving? Also I get that you were tired of her talking about Blair, but did you have to act like this? Just be happy for your mom. She deserves it after those years of working hard and at times struggling. Really, and it doesn’t mean she is going to Hollywood. Dear lord, what are you 5? I would think at 13/14 you would understand some things a bit better. And then when mom gives up things again for you and totally collapses, you finally see that maybe you went too far? Wow. That took you long enough.

I was happy for Alex, but I could also imagine her worries. Also, she is only just turning 30? Dang, she had her daughter at a young age. 16/17 given her daughter is now 13.

The ending was pretty typical, and frankly due to everything I couldn’t enjoy it as much as I had hoped. I still don’t really trust Nolan, and the spark that I saw at times disappeared with each stupid thing that happened.
Though I did like what Nolan and Blair did. That was really sweet.

Also I quite liked the art, it was really nicely done.

All in all, it had its good moments and I do love the art, and I do hope that Alex is able to pursue her dreams!