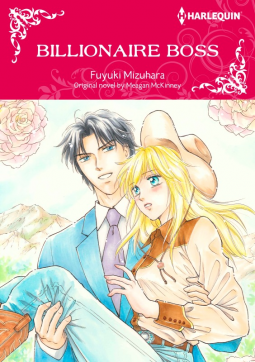 My third Harlequin Manga from this new batch, and I am very excited to start this one. Currently sick as hell, so I could use some romance/comedy/silly drama. This one has a cute cover, and the blurb sounds kind of interesting. A playboy who may have found the girl, but will the girl like him since he is a playboy? Let’s go find out!

Well, I found him quite a bit of a dick at first. As she said, she send in her resume in time, and even flew over, and then he tells her she is nothing special. Um… And then he continues saying all sorts of things, making it seem she doesn’t get the job, and then Oh yes, can you come with me and blabla. Dude. Really?

snorts“Mr. Morgan has a private jet and wears tailored suits. I bet he has everything he wants.” Sure, a jet and suits are like the epitome of wealth and happiness, right?

Oh yes, someone throws sugar and ice tea over them, and that is sexy? OK. Sure. If you say so.

I like that he is thinking about our girl, yet then says it is a trap and he won’t fall for it. Cue his current girlfriend who is clearly more interested in getting a matching car for the ruby earrings. Maybe you should open your eyes a bit further dude?

Am I the only one who had expected a gigantic house? This one looked quite adorable and small.

Oh wow, that dude keeps being a dick. He heard her say something and never even dared to ask her more. Oh, no let’s just assume. Dick.

But sure, he kisses her, just as the blurb promises. sighs Sorry guys, just not feeling this hot and sexy kiss (supposedly). I still want to kick the dude between the legs due to how he acts.

SIGGGGHHHHHH. Oh look, the girl I may or may not like, hot cold hate love, wants to buy a house. Well, let me do it for her. And then kiss her. SIGGGHHHHHH. I am glad our girl is standing up for herself, because this guy just pisses me off. But later things happen, and I was just so pissed. Why do guys always need to white knight girls. We are fine on our own. A bit of help is nice, but no need to buy a fucking house or to do fucking everything.

But I guess we have to feel sorry for the guy. HAHAHAHAHAHHAHAH. No. I just continuously want to kick him in the nuts for doing the things he does. Is he like 13 years old? Because that is how he acts.

continues sighing at the dumbness of the story and the characters in it Good lord, these characters are all acting like they are teens instead of fully grown adults with jobs, responsibilities and the whole other baggage.

snortsShe tries to explain to him what is missing, and his answer? “I don’t understand what you’re trying to say.” Good grief dude. And then things escalate further, and I really wonder if that guy has a fucking brain in his head. Because he just doesn’t seem to understand anything in life. Dear Lord. It is a miracle that the guy can wipe his ass (or maybe he has someone for that as well).

sighsThat rushed ending. And of course, it is a happy one. Welcome to Harlequin manga, were we will shove all the happy endings even if they totally don’t match the story in your face. 😐 Another HM that made me not care for the ending. Normally I look forward to it, but with this couple no? I just can’t believe that he understood it so quickly, it has been a long time, so many hints and chats have been happening, and now, just a couple of pages, BOOM, he understands, and she falls for it. sighs

But hey, the art was pretty decent. But the story and the characters (especially Seth) just sucked so badly.

This was a disappointment. sighs 1 star for the art, and sure, Kirsten was also not too bad at times. Not tagging this as romance, because there was no romance. There was sex, some kisses that Kirsten didn’t want at times. I never felt any chemistry or romance.