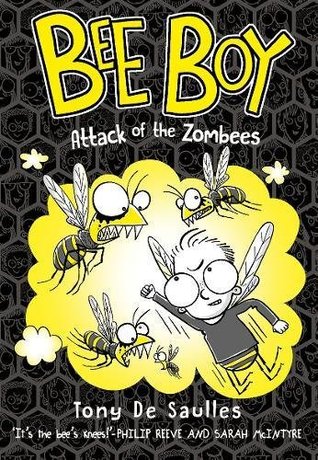 Bee Boy is back again! This time with a new villain, zombees, a new friend, and more. Such a beetastic read!

I was more than surprised to see the second book at Library #1, I hadn’t expected it to be there so fast, often it takes them months if not years for books to be added. I was delighted, and yes I am have done a little dance.

Bee Boy is back, though still hiding his identity (because of that promise he made before). Everything seems to go pretty OK at first, but then when a new boy arrives at school things go topsy turvy quite soon. There is something happening in town, something that makes the kids sick, and that makes bees go nutty and zombie.

I loved that Melvin immediately knew something was up with the school dinners. I just wished that people would have listened. Then again, I can also imagine that people wouldn’t believe him because all he was relying on was smell and instinct. Not something most people will take as a valid thing. Oh well, I think that after x number of times the kids will definitely listen next time that Melvin says no to something.

I loved that Melvin quickly formed a plan, and was doing things as Bee Boy and as Melvin. He was so brave in this one.

I am happy to see the bees again, and see how they are doing.

The new villain and what was going on in the factory were very interesting, and I was eagerly reading to see what would happen and what plans were concocted at the factory. I still wonder who the other mysterious person was that he was talking to on the phone.

Priti? She is getting the sense that something is up with Melvin and I wonder if in the next she will find out the truth and what Melvin will do then.

Berty? Not my favourite guy at first, but later on I liked him much much more. In fact, I hope that we will see him again in the later books.

Of course, like the other books this one is delightfully illustrated.

The ending was just wonderful, and I am happy for the bees. That was quite the plan of Melvin, and I am glad that he was able to give his mom a part in it as well.

All in all, I can’t wait for the next book, this time with vampire mites! Oh my!