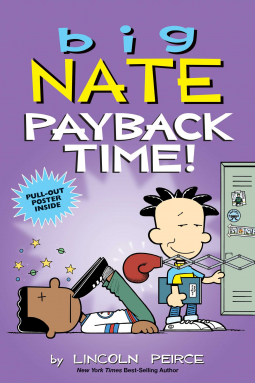 OMG, you guys! Imagine my delight when after many months of no new Nate we suddenly have a new Nate on Netgalley! I just had to click that Read Now button. Thankfully, I got the whole day free so I can read tons and tons of books! \o/

Right from the bat I am laughing as Nate’s friends wonder why Nate hasn’t done anything stupid for a week when he pops up and states he is allergic to Godfrey. 😛 Classic Nate. At first it did seem he was allergic to her, and I would have loved to see it be true, but you can already guess what is really going on.

What do we have in this volume? Well, for instance soccer (where Nate was clearly doing the same thing he was judging another kid for), deadly diseases (and Nate wants to sacrifice his annoying classmate Gina for it, and then later goes on the hunt for another victim which had me in stitches, Nate is dedicated to curing (or at least infecting) someone), detention (Nate meets Jody who is a goody-two-shoes, really, how did he end up in detention, he just prodded someone lightly with a pencil, dear Lord), Halloween and reports (of course Nate had to make it a bit juicier, than again I would have done that too, also why did he think it was brilliant to go as Gina? Eww.), of course tons of schoolpapers as Nate holds meetings and writes stories and comics, I loved his idea for a student lounge, dang that was a dark turn on that Cookie Cutie story, and of course there are many other things happening in these 178 pages! I had so much fun reading about all of Nate’s adventures and (dumb) ideas. He is a really fabulous character though his ego could be a bit less at times as it does get a bit annoying to see him brag or act like this.

Oh, and I was surprised that Netflix exists in Nate’s world. We don’t always see much of technology in his world, except for a rare PC here and there, so I hadn’t thought Netflix existed there.

While maybe reading a very easy book isn’t the way to go for a book report if you are older, I do understand Nate’s pain. A book is still a book.

I wasn’t a fan of the longer one-page comics. Nate’s comics are fun if they are 4 panels, but any longer and it starts getting boring.

But all in all, I had tons of fun reading this one and I can’t wait for the next Nate to pop up. I need more of this silly boy.