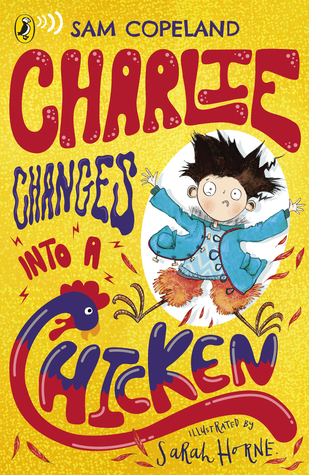 Meet Charlie a fairly normal boy… well… with the exception of the tiny little thing he has.. he can change into animals.

I just love books like this so of course I had to get it, and boy oh boy I had so much fun reading it. It mixes magic and humour with serious topics like anxiety and a sick family member. I loved how well the author balances these and makes it a fun and engaging story.

Charlie was such a wonderful sweet boy, and I knew pretty much from the start what was making him change to animals, but I guess that is because we are the readers. I still had fun seeing his friends help him out and try to figure it out (though that was at times quite hilarious as the things Flora thought of were quite.. um interesting, and maybe dangerous).
I loved how, despite that Charlie changed into random animals, he tried to make the best of it. Like when he changed into a pigeon (and was harassed by a bunch of French pigeons (yes, really) he decided to try out flying).
He was really sweet towards his parents who had their heads full with their other son who is sick, trying not to give them more stress and worry. Though I have to say I wished he talked to his parents more, as now he was at times so worried and stressed about things that he was unhappy. 🙁

I loved Charlie’s friends and it was just fabulous that they believed him. Sure, at times they were a bit sceptical, but wouldn’t we all be if a friend tells you they can change into animals yet you never see it happen?

I did think it was a shame that he

I felt so sad about Charlie’s brother, but I loved how strong he was the times we saw him. He wasn’t letting the disease win, he was going for it. I loved how he was with his brother, just the same brother as he always is (at least that is what I could see) to make sure that his little brother doesn’t worry too much. Yes, he might act tough, but you saw he truly cares about his little brother (that hug awww).

At the musical at the end? Oh my, I cried, so so many tears. I am already emotional because of all the things going on in my life, but this scene was just perfectly written.

Then there was the fourth wall breaking, I just ADORE it when books do that, or at least, when they do it well, and this one does it perfectly. We get footnotes, funny letters, a letter from the publisher regarding the title, and the author just pops up at times. It was hilarious, and I was already laughing because of the story, and then these random parts popped up. Loved it!

The illustrations? Well, they were perfect, but then again Sarah Horne is an amazing illustrator so I already knew they would be perfect and wonderful. Her illustrations made the story and the situations even funnier. Seeing a rhino poo out of a window is hilarious in my imagination and reading the story, but seeing an actual illustration and also the aftermath? I just rolled around during so many times.

The only thing I didn’t like was the bully and how he apparently thought he was the villain and several other things. That kid really needs to learn he isn’t living in a freaking James Bond movie. I just was quite annoyed with him and his attitude, how he purposely tried to get Charlie to change. Who does that?

All in all, a fantastical, magical, sweet story about a boy who changes into animals. A book about friendship and family. A book about rhinos pooping out of windows and French pigeons. Recommended to all!