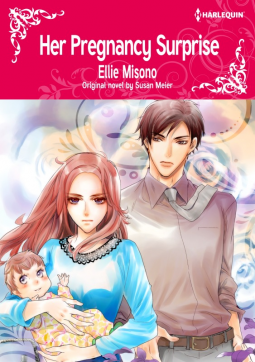 The second of nine Harlequin Manga, and this time we have pregnancies, a boss who clearly is meh about it, and trying to get second chances. Oh, and I need to say that I much prefer the inside (black/white) illustration of the cover much more than the cover itself. The art looks just way better.

So, here we go! My fiance was making fun of me a bit when he saw the title. He is currently at home because we have some people coming to tell us about what they can mean for us when we move. Hopefully one of them has a good price. 🙂 Reading this will be a bit awkward then, but hey, maybe it will make everything better. 😛

Apparently they have an agreement and she is clearly not too happy about things. Already threatening him that he won’t get rights if he screws up. Given the blurb, and that he acted that stupidly, I can imagine she is not all too happy with this deal. Why did he suddenly decide to care for his baby?

snorts Dramatic hair floating up when a character is angry/upset/shouting. No wind, no nothing, but the hair just floats up.

And we go back to a year and 4 months ago when they were still boss/worker. I loved seeing them together, and it gave a bit more insight in these characters and how they ended up where they were when we saw them at the start. They were quite open with each other on childhoods, earlier relationships, work. No surprise, given that she got a baby and this is Harlequin (sorry, but the amount of Harlequin woman who have sex one time and get pregnant are over 9000), they have sex and voila pregnancy. rolls her eyes
I do have to say I was happy that she was so forward. She wanted him, and she knew it wouldn’t work out (though I am guessing she didn’t know about the pregnancy) and so she told him how she felt.
snorts Sorry, but I found his reaction to her pregnancy hilarious. Dude, you stuffed your dick in her, you came while having sexing, you shot your sperm into her… if you didn’t want to get her pregnant… maybe you should have used a condom or asked her if she was using the pill? But now you are blaming her. Wow. Classy.

Also this: “Telling a man who broke up with you that you’re pregnant is a classic trick used by women to get men to marry them.” Um, you guys didn’t even date. You had a fucking one-night stand and then clearly told the girl you don’t date and that it was just a one time fuck. What the hell is up with this writing?

“One day he’ll learn that I was telling the truth. But.. until then will I be able to overcome this solitude?” Well, duh, of course you will. You are in a Harlequin manga, oh wait, you probably don’t know that, but we do. So be happy.

While I admire that she wanted to meet him and show her the baby, I frankly wouldn’t have done that. If the guy wanted to see his daughter he had all the chances. Maybe harsh, but these type of guys are just on my big NOPE list.

What is up with this conversation. First he is not happy with her being there, the next panel he tells our girl that she just hopes that it is his baby, and the next panel he won’t play along with her farce (snorts), and then states he is going to raise the baby. What the fuck? And then he proceeds to tell our girl that she has nothing to stand on as he has power and money. What the actual hell is this? And I am only at 38 pgs… Please, someone help me.

But we now get to the point of the intro, they are starting to live together to see if it works out.

Aww, how sad, are we supposed to feel sorry for the dude for having a shitty relationship before this one? I am sorry if I sound harsh, but I just don’t like the dude. AT ALL. And having a sad past isn’t going to make me care.

Oh good grief, she is falling for him. And I am betting he is as well. Yes, I could have guessed, but still, I was kind of hoping it wouldn’t happen. 😛 Not a wish that will come true though. I am kind of curious how these two will get together because I miss a lot of chemistry between the two.

Dude, she didn’t even know about your son’s death anniversary until you just TOLD HER. Hello. Stop thinking that everyone can read damned minds.

“Does Danny like children?” Um, he is completely broken by the death of his child. DUH.

“Nothing will as long as he continues to ignore his own problems.” Um, I do see that he is trying, but hello, it isn’t as easy as just poof and it is over. It takes way more than a few weeks to get over shit like that. And besides, you are also not happy with certain things, so you have work to do as well.

Lol, at least he is honest. 😛 She asked him why he seemed much happier this morning… and Danny had a very honest and wonderful reaction: “Um, that’s… because, last night, I was able to satiate some of my urges.”

Ah, we find out what happened to his kid. Poor guy, poor kid. 🙁

Then we have the court case, I was kind of shocked how that one went. Dude, you can’t just take custody of your kid like that, she cares for her baby, she has done so for some time, and she is a good mom. Just because you have issues and are rich/powerful, doesn’t mean you can claim custody. Especially if, until now, you never cared about the kid. 😐 Later on we find out that his reaction was for something else, but the way it was written/drawn clearly showed that attitude he had at the beginning, which didn’t make me happy.

Also, what the hell dude, once again with the accusations, once again thinking she was trying to trap you. What the fuck.

Sorry, do I need to swoon now with that ending? HA, sorry, I haven’t felt a spark between the two, and the shit that is happening the whole time, plus with how the ending felt all out of nowhere and rushed.. No thank you. This was the worst ending so far in the entire Harlequin manga universe.

The art? Well, at points good, but at points it wasn’t at all. Magical flying hair when there is no wind, poses that seemed like the characters limbs were broken, strange eyes, weird head positions, I even showed a few to my fiance and even he wondered what was going on.