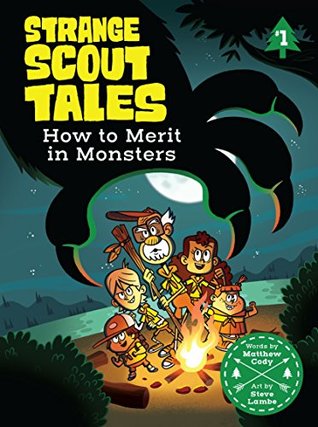 It is time for camp, but things are going to take a turn for the supernatural very soon.

I stumbled upon this book and was instantly interested. Camp? Sign me up! Supernatural stuff? Ohhhh yes! And this was even more fun than I had thought it would be.

Meet our MC, Ben, a very very indoorsy guy who sees the outdoors as only a way to get inside. 😛 Yep, he is that kind of guy, but his parents are now shipping him off to Nature Scout’s sleepaway camp. Yep, this indoorsy guy is going to have to go outside and do stuff! I was at first not too sure about this guy, I am personally a girl who is both indoor/outdoor and I just love going outdoor, so I was wondering how this indoorsy guy who handle going outside. Well, beside some complaining… he was pretty OK with the camp situation. He made the best out of it, and he really did have fun. I think it also helped that his camp placement put him in Troop D, which at first hand seems to be the troop to put all the misfits in, it is even called Troop Dweeb, but later we find out that this Troop is actually very very special and has a big role to play. Since the blurb already tells us what is going on, and the cover is also very much spoiling things, I can just mention it. The book Ben found is a Strange Scouts book, and the scouts in Troop D (which stands for Danger), are being trained and educated about these strange creatures that live on this planet. Help out the creatures, let them have some peace and quiet. It was just the best, and I would LOVE to join that troop and help out.

As the camp continues things are happening, things are destroyed, and eventually people disappear! Oh no! What does it have to do with the handbook that Ben found in his troop’s house? And what is up with that big giant footprint he found near destruction? It was all very exciting, and a bit scary as you never know if the Big Foot is a good or a bad guy.

I loved what they did to tame/calm down the Big Foot, though maybe I should say laughed, as it was hilarious!

I wasn’t a big fan of Spitzer, he was just a big mean bully, and I would think, given revelations, that he should have known better. 😐

I am glad that Walter had a talk about what was going on, and I adored the kids reactions to it. I can see that this troop will be fabulous at helping out supernatural beings.

The other kids in Troop D… well, hit and miss. I wasn’t a fan of the gaming guy (if you are just going to play games, go home ), Ginger was OK I did like how she never let anyone get away with anything, and Asma was nice, though I wasn’t sure how I felt about her thinking that she had all kinds of diseases and spraying disinfectant all over the place.

Walter, at first I thought he was just a kooky old man, but in fact he got all his marbles, and he fits so well with Troop D. he is your typical sensei/teacher type. 😛

The illustrations? They were oh so much fun, and made the book even more fun to read. I was thinking they looked quite familiar, and I found out why when I finished the book and the author and illustrator were introduced. It is the animator from The Fairly OddParents and Teen Titans Go!. No wonder that they seemed familiar. I adored TFOP and I am still loving TTG.

I will be reading the second book very very soon, I so need more of this series, it is just too much fun to read. The next book promises a meeting with Loch-Ness monster!
And I would of course recommend this book to everyone in need for a fun supernatural book taking place at camp.