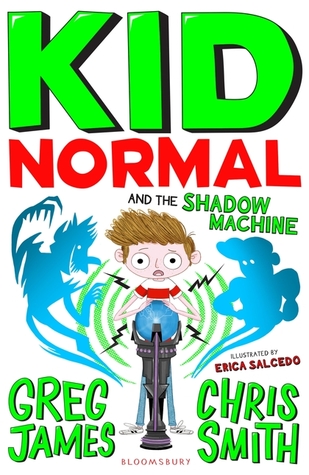 Kid Normal is back in a brand-new exciting story~

I was very much excited about this book, yes, I was also worried. I am just not a fan of Magpie and I knew there would be plenty of him in this book.

I decided to be smart, and just skip all the Magpie/villain chapters. Luckily, there weren’t much of them. Phew. And so I enjoyed the book more, though I have to say most of my enjoyment came from the latter part of the book. When all the action happened, and when the Shadow Machine finally makes an appearance (yep, that one is mentioned in the blurb and the title, but it doesn’t show up until 2/3 of the book which was a surprise to me, I kept wondering when it would pop up).

I did like that the first part was from Mary’s POV, that is something different from Murph’s. Normally I quite like the girl, so I was very delighted that we would get a chance to see things from her eyes, but I have to say I wasn’t such a big fan of her in this book or her chapter. Why? She was just so jealous all the time, and she kept making remarks about Angel and Murph. Yes, I can understand that she isn’t happy with how much time Murph is spending with Angel, and yes, we see missions go wrong and Murph being quite moody. But did she ever talk to him? No. Not until everything goes wrong. 😐 And sure, later on we see that Murph could have done it more subtle, as he takes the whole taking care of Angel and showing her the world a bit too far, but still. Talk to each other. Give him a chance to explain.

There was so much drama in this one and yes, at times I was just rolling my eyes at it all.

Still there was plenty of things that were fun. Let me list them here:
-The Shadow Machine and what it does. Oh my goodness that was just so much fun when we find out what it does. I don’t like Magpie, but he does have a brilliant mind. Lol, that sounds oh so wrong when I post this, but it is true. Come on, no one could have thought of that.
-How Murph handled the Shadow Machine and did some pretty dang epic things with it.
-The fourth wall breaking and the letters/messages from the authors. I had such a laugh each time they kept popping up.
-Learning about Angel’s power. Dang, that is a pretty awesome one, I haven’t heard of that power, and I wonder how she will be using it in the future and how she will learn to handle it. As it is a power that comes with tons of responsibilities.
-The illustrations. Still fabulous and fun!
-That Magpie, in all his solitariness still formed an army of Darkness.
-Who was truly behind it all.
-The ending and what that will mean for the next book. Will the superheroes be exposed?
-The ending was just amazing, I am was grinning from ear to ear, and enjoying each and every moment.
-Angel was such a fun character, sure a bit cocky at times, but I enjoyed reading her reactions to things that were just so normal to us, but weird for those stuck in frozen state for 30 years.
-The Parents Day thing that the school had to put together and almost got ruined by a certain teacher.
-Seeing our team work together and make their powers even better. They may have some odd powers but together they can make them totally kick-ass.
-The dummy race and how that ended, I was in stitches.
-Finding out what Magpie’s original power is.

As you can see, plenty of fun things, and I did have tons and tons of fun reading. I cannot wait for the next book, I need it now!