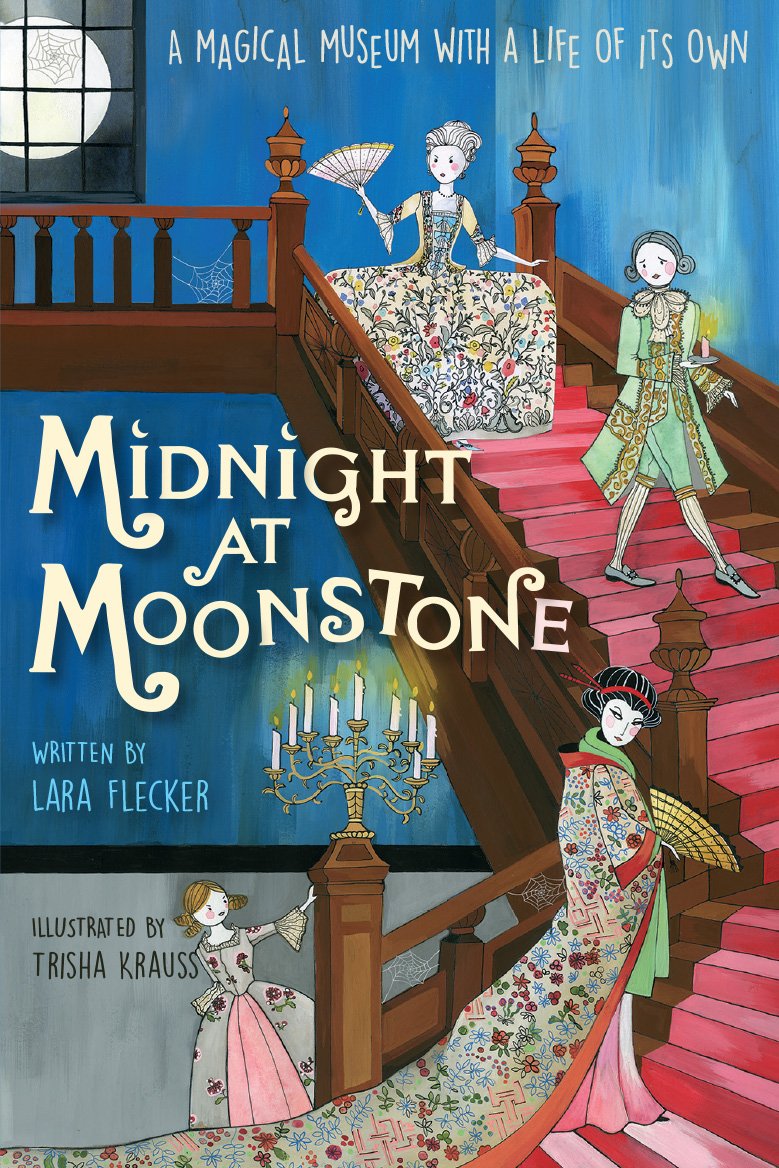 As soon as midnight hits the costumes in the Moonstone museum come to life. They dance, they bicker, they walk around, they are looking for something.

I was very excited about this book when I first saw it on Twitter, immediately pre-ordered it even though I didn’t know if I would like the book. Then the waiting game began, but then it finally got released and I had to read it as soon as I could. Yay for being sick and being able to read tons. cheers

I will be writing a good/not so good review, I am just so so tired and my body just wants to go to bed. But I also want to write a review.

Good:
-Kit! I liked Kit from the start, I can imagine that she ran away from her father, from her plans. Her father has all sorts of expectations and he won’t listen to her at all. She is constantly shipped off to her brother/sister or gets a nanny, because taking care of her is not what her father does. Instead he is constantly away for travelling. Unlike her sister and brother, and father of course, she is more into art and making things. But will they listen? No. She was also brave, never gave up, and tried to do anything to help save Moonstone, help find Minna for Fenella. Even though it meant staying up at night, she continued on.
-The museum! I just love costumes, I love museums that are set in what once were houses, grand manors and villas. And with help of the illustrations (and later on some more information on the costumes) I could get a clear image of the costumes and they were all so pretty (well, some of them were prettier than others).
-The fact the costumes came to life at night. I still wonder why and how, either I forgot about it, or maybe it wasn’t mentioned. It sure was magical that these gorgeous costumes came to life, each one acting the way of their costumes (hopefully that makes sense, my mind is a bit wobbly, but I mean that each one had a costume and they acted accordingly to it/the time period of that costume).
-The saving of the museum. As soon as it was found out that the museum needed saving Kit fully went for it, despite her grandpa’s lacklustre attitude towards it. I loved how hard she worked, how hard she tried to make the costumes see that she was there for them and that she wanted to help them, and that to make it in that short time, she also needed their help. Not just with cleaning, but also with fixing the costumes.
-Who Minna was and where she was. That was an interesting part of the book, and I looked forward to Kit figuring out how to find her and how to get her back safely for Fenella.
-The friendship between Fenella and Kit. They instantly had a bond, though Fenella should learn not to sneak in someone’s bedroom in the middle of the night, that is just creepy. 😛
-The cover/illustrations. I adored them to bits. The style was just perfection for the story, and I adored the costumes.
-The ending, that one had me smiling so much. It was such a sweet and heartwarming ending and I am happy to see how everything came together and was resolved. It certainly was a happy ending for everyone.
-Reading about the family, learning more about Kit’s mom, what happened to the family and why they haven’t had any contact with the grandfather for so long.
-The magic and nostalgia of this book. It felt like it was set in a different time era than it actually was, which I totally love. It reminded me of my old childhood books.

Not so good;
-The grandfather and the father. Dear Lord, they were just so terrible. Instead of being warm and welcoming he was a total meanie towards his granddaughter. He made fun of her when she was trying to save the museum. He was mean when she wanted to learn more about her family. He was rude when she even came close to anything in the museum. He got pissy for so many reasons, and I understand he may have had a reason, but still. No. Just no. The same goes for the father. He should understand that just because you want something that doesn’t mean you have to force it on your kids. And that maybe you should just stay home a bit more instead of pushing her to other people because you have to travel.
These two characters are truly the reason why I am not rating the book a 5 star, instead opting for a 4.5 stars. If these two character had been kinder earlier on, I would have easily given this a 5 star, maybe even a bit more than that.
-That Kit didn’t even check her phone at all. While I did like it as it gave a very nostalgic vibe to story, it also feels a bit weird that she never did check it to make sure things were OK. I get that she wants to be away from her family, and she has been busy, but still. Also I found it kind of magical the phone still had battery. I guess she turned off her phone totally, that would save the battery, at least for a bit longer.

This was such a fun magical book filled with delightful costumes, a museum in need of saving, a great MC, and tons more. Read this one, you won’t be disappointed.