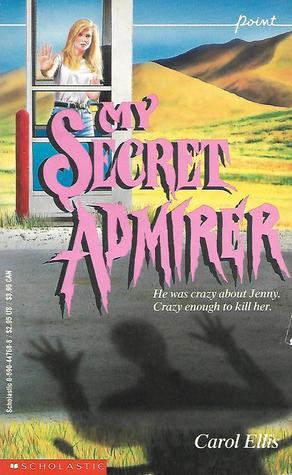 New girl in town gets secret admirer, but does that guy have the right intentions or not?

So, me and the story got reunited again. Long time ago I read a ton of these Point Horror books in Dutch, including this one. I bumped against this one again, and thought it would be nice to read it again and see if I liked it as much as I did back then. Mm. Yes and no. It was still good, still creepy at points, but also very easy to figure out, the MC was just dumb as hell, and who the hell leaves their 16/17 year old alone in a new place for so long?

Jenny is the new girl in this tiny town, I should say tiny tiny tiny tiny town. She lives in a gorgeous house, far far away from things. Yes, her new friend lives down the road, but that road is apparently (going by the descriptions) pretty long. The first day she meets someone (Sally) and so gets to join the annual scavenger hunt but things happen there that will stay with her for much longer. She thought she would have a nice time, but from that moment things go wonky.

Jenny should really just have shut up her mouth that she heard something when she was on the cliffs. But then we wouldn’t have had a story. 😛

There were tons of spooky and scary parts that had me on the edge of my bed (sick and mostly in my bed these past days). When Jenn’s dog went bonkers (which just gave me goosebumps, it is the middle of the night and the dog is whining and scratching at one of the doors like a mad man), when she found those presents (the good and the bad presents both), when all sorts of other things happened that escalated as the story continued.. Yes, despite me rolling my eyes at times because of how cliché it all was, it was still very exciting to read. It has been years since I last read this one, so I had no clue how it would end. Would she survive? Would someone save her? Would Diana live?

As I said in the first part, I can imagine you can leave a 16/17 year old alone in a home for 2 or so days, but this long? And in a new place? With no real connections if something goes wrong. Oh and you just let her deal with some painters (who you don’t know). It just felt weird and off. Convenient plot device so that all the events could take place. Plus, conveniently, Jenny just stays at home throughout everything. Barricading her home with cans of food and forks. 😛 She did try to get her new friend to stay over, but her new friend is just very suspicious and seems to have plans all day and all night. But I still wish she would have talked to her parents. Sure, they seemed to be a bit too busy to care about their daughter, but I am sure one of them could have come home if she had at least told them about her worries. About the gifts.

The admirer? Gee, it was just so obvious what kind of guy that was and what his plans were. But I had a laugh that Jenny truly thought he was some kind of sexy dude who wanted to give her attention. Sorry, but this guy just screamed stranger danger to me. I guess no matter the time kids make stupid mistakes like this. These days it is people pretending to be good people on the internet, back then you just left presents and messages. And if you are lucky and got a dumb person, they will meet up with you. sighs

The ending was pretty good, though also a bit anticlimatic. I kept waiting for something else to happen, but then the book was over and we got to the author’s note.

But all in all, even with a dumb MC who annoyed me at times, a suspicious best friend, cliché stuff, I still had fun reading this one. There were plenty of exciting and scary parts, and I had fun figuring out who the baddie was in the story (so many red herrings).