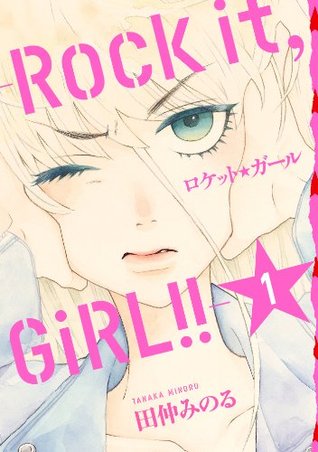 What would you do when you get discovered… not for your voice.. but for your guitar playing?

I was on the hunt again for a new manga, and I came across this one. I love manga about music, so I was eager to read this one. However, after reading… I am not too sure. I will finish this series because it is only 2 volumes, but if it was more I would probably have stopped reading with this one.

Don’t get me wrong, there were good moments. The art at times was just beautiful. The characters were likeable at times. I loved that, even though she wouldn’t be singing her songs, she gets the chance to be in a band playing her guitar and her songs. I loved seeing the band get together and try various things and get closer. I had a laugh at the manager and her fierce determination (though she was also a bitch at times). I loved getting more backstory on Kaname (and her family). Then there is the girl with the rasta-ish hair and her love for our giraffe girl. 😛

But I also didn’t like a ton of things. Like Kaname and her gloomy and depressing attitude (she is a great guitar player, she needs to see that). Which wasn’t always her fault as people were just acting plain shitty. Like the lead girl singer and how she often treats Kaname like she is the worst and just a piece of poo that needs to be removed (like with the nickname or being blunt about Kaname’s singing) but then the next time pours over her in love? Or the manager who just acts like a bitch (but maybe means it nice and just doesn’t know how to act like that)? Or how her uncle just kicked her out of her job without remorse (though we do see that he was sad, but I wished he had shown that as now he came over as a dick)? Or how people laugh at her? Or that backstory taking place in school? So yeah, I can imagine that she feels down and depressed. But still, there were also instances when there was just no reason for her to act like that. Like when she just ran away and disappeared after the live, I get that it was too much, but it still felt pretty eh for various reasons. I also wished she would stand up for herself. Come on girl, tell these girls how you feel. Tell that lead girl that you feel shitty because of her.

I liked that the title of the manga popped up in the story. OK, the actual song title is Rocket Girl, but our angry lead singer girl saw it as Rock it Girl. 😛

While the art was pretty nice, and at times even gorgeous, at other times it was just beyond weird. Kaname has some really intriguing facial expressions. And not just her, but also others, but with Kaname being the main focus it was mostly her.

So a very hit/miss manga. There were moments I enjoyed, but also plenty times I didn’t enjoy it. Again, I will keep reading, just one more volume. However, not now. Someday soon.