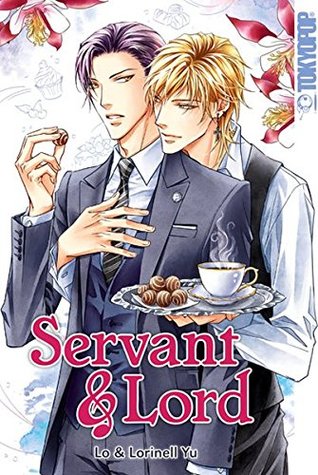 I received this comic from Netgalley in exchange of an honest review.

I just ADORE BL, and I was excited to see a manga-style BL comic on Netgalley. Of course I had to try it out, plus the idea that it was Servant x Lord made it all the more tempting. 😛

The story starts with Daniel coming into Christian’s life when he is around 9/10 years old, which see that Christian is instantly happy with Daniel and that they both have a great bond. Something happens and we skip over to the next time which comprises of the next two chapters, when Christian is around 16/17 (at least I would guess so given how he looks and acts). Next up is 3 years later and I am guessing Christian is now 19/20. Which made me finally be able to root for these two to get together. Yes, sorry, I have my principles. I don’t care about age differences as long as both characters are 18+ otherwise it is just a no. It was cute that they both had feelings in chapters 2 and 3, but it made me slightly uncomfortable given their ages. So I was glad that nothing happened/that Daniel was able keep his feelings in check (because you could see he was tempted when Christian was licking his arm).

I had a laugh when Christian came back and found out that his love had other interests now. Yep, that is what happens, plus I can imagine that Daniel didn’t go after Christian. He was still the servant, and Christian the higher-up. He didn’t want to lose his job or reputation. But oh my! We find out some juicy things from Victor. Before that moment I loved Victor, especially had a laugh when he was called Christian’s girlfriend by Daniel. Later on Victor shows he just really cares about his friend, and I can imagine, but that is just not the way to do things.

I was expecting it to be a bit longer before Christian found out about what Victor is hiding, but nope, just a few pages after the juicy things… Christian also finds out. You may now all take a good guess at his reaction, and how his friendship with the guy is now.

Ohhhhhhhhhhh yes, go go Christian! I was rooting for this guy to finally tell Daniel how he felt and also to find out if Daniel felt the same way (yes, duh, everyone can see that he is just trying to not feel that way). On the one hand I loved the couch scene, on the other hand, not that much. I am getting a bit tired of things having to be forced in BL. 🙁

I had a laugh at how Daniel reacted when he found out Christian was working in his workplace. And then what he did after that. His other employees were all wondering what was going on and what their boss relationship was with Christian (a very hot one, well as soon as Daniel finally decides that a relationship with Christian is good and he finally accepts his feelings. I get that he wants the best for Christian, but come on!!!!!!!!!).

“Wait a minute.. is my birthday today? Thought too much about Chris and totally forgot.” snorts Oh Daniel, you are in so deep. 😛

Daniel in reaction to what Christian said: “Haha, you’re asking for my permission to stalk me for the rest of my life? Who would agree to that?” That look on Daniel’s face was just too precious.

Yayyyyyy! Finally!!!!!! I was already wondering when it would happen, we only had so little time left in this book, and I needed them to finally confess and see their feelings.

Oh my, Christian:”I don’t know what’s going on… but if you change your mind tomorrow, and try to escape again… I’ll handcuff you to the bed.”

The ending was fabulous, haha what a brilliant plan by Daniel. That is one way to get Christian to go to LA. 😛

bleeds to death due to that character page at the end

All in all, a very well written BL story about two guys who were meant to be together and finally found each other again. Finally managed to confess, finally could be together. EEEEEEEPPPP! swoons Fantastic characters, lots of cute scenes.