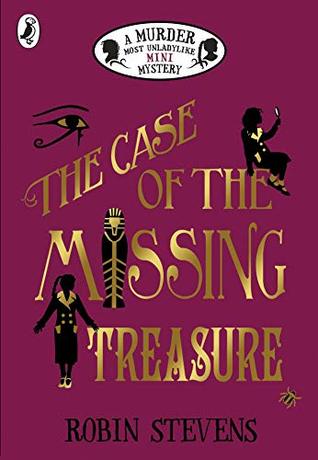 The girls are back again and they have a new mystery to solve, this time involving mummies, treasures, and more!

This one is a short one, 96 pages + some extras. I was at first very worried that this would just be an UK store exclusive, but then came the happy news this one would also be released to everyone. Imagine my delight and how hard I squealed. I would be able to read this book! Yay!

This time our POV is Daisy. She isn’t always a favourite of mine, mostly to do with her attitude and how she always thinks she is the best and no one should surpass her. I did love that she had a coming out in the Death in the Spotlight book, I already had my suspicions given how she acted whenever a boy was around + how Hazel was acting when Alexander is around.
However this one takes place before the DitS book, but we do see tons of hints here for that book. She states that she never sees boys the way Hazel does.

But at times I was a bit frustrated with her (how she treated the treasure hunt and her uncle, she should be a bit more appreciative of him or how she treats Hazel at times), but I also saw a fun side to her. It made me quite happy that this story is from Daisy’s POV, it gave me a better chance to get to know her. To see how much she grew up from when we first meet her and Hazel. Her big big big plans for the future, and how she already thinks she is there. 😛 I had a bit of a laugh at how she kept competing with George on things.

I just adored seeing them walk around London on their own (first at the treasure hunt and then later when they were trying to solve a whole different mystery). I know this sounds a bit silly, but how to explain it better, this one takes place in 1936, so it isn’t that common for kids to just walk around without chaperones. Especially the girls. So I was delighted that they finally had the chance (and later took the chance) to go outside. It really shows that they are growing up, and that they want more freedom.

Felix treasure hunt was a fun one, I had fun figuring out the codes and the riddles myself. Cheering for the characters to figure it out as well, and then being excited to see what the prize would be.

We also get another mystery alongside of the treasure hunt. Someone is stealing treasures, but who is it. Inside job? Something else? Our girls (and our boys) are on the case!

I loved that we also see our Pinkerton boys again. They are such fun characters, and I especially love Hazel’s reactions to Alexander. It was great fun to see our two girls and two boys cooperate and try to solve the mystery together.

All in all, highly recommended and I can’t wait for the next mystery for Hazel and Daisy. Will we go back to the boarding school again? Will the mystery take place there? is excited