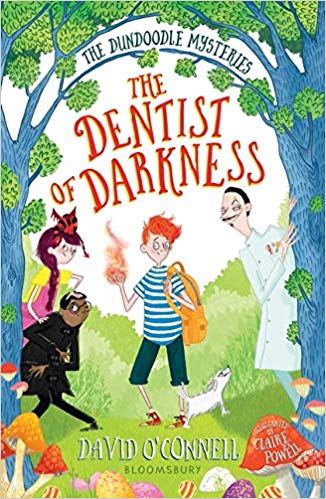 I was so delighted that this series would be getting a second book (and now that I finished one I am super excited seeing a third book is coming next year), I was curious to see what kind of things would happen in this one.

This story is about an evil dentist, who was definitely creepy as hell (and I already don’t really like dentists), but also about a new enemy threatening the town/the world. Oh yes, and the big tree in the midst of the big magical forest is up for its renewal (what a coincidence!)! Tons of things are happening in this town, and oh boy, it was exciting to see everything come together and form one big, exciting story.

We also see Archie’s aunt and the twins. Can’t say I was happy to see them, though I did like the weapon the girl made (she is pretty dang awesome even though she is evil as hell). I have to say that I did like that the twins told Archie a few things, which I found nice of them.

The Unquiet Night? Loved it! All the food sounded absolutely delightful (and I was already in love with those cookies, then I learned there is so much more food), and it seems like a wonderful night filled with weirdness and magic. I can also imagine that they do it in the summer if autumn/winter is so terrible, you don’t want to trick and treat during that time.

The dentist was creepy and I didn’t like him at all. His campaign was just the worst, but oh so typical of a dentist :P, and I was saddened seeing people fall for it.

Though if there was anything creepier than an evil dentist… well The Mirk is just that. That guy/creature is just so creepy (thanks to the description and the illustration).

The toy store was a magical place, and I would love to visit it and look at all the fun toys the old lady has in stock.

The riddles and where the jewel was? I had a suspicion from the moment I saw the riddle, and I was right about it. Yay! Still I had tons of fun rooting for Archie and his friends to figure it out as well. How long would they take?

I did feel sorry for Archie, everyone keeps pressuring him, he just recovered a bit from the whole ordeal in the previous book in which he had to do quests to prove he was the heir. In this one he has to save a tree (and find the charger as they call it so nicely), live up to his guardian responsibilities, think of something special to save people, and the list goes on. I can imagine it becomes just a bit too much for him and that at times he does want to just curl up and don’t think of things. I would have liked his friends to understand that a bit more. Now at times it felt like they just wouldn’t understand that their friend just wants to enjoy life and get used to all the things in Dundoodle.
But I did love that despite how he felt he still fully went for it. He made new candy, he did his best to save the town, he was just wonderful and I am proud of him. Good job, Archie. Things won’t always be easy, but you can do it!

The ending was oh oh oh so exciting and I was totally into it, cheering for Archie and everyone who was helping him, hoping he would make it, hoping that he was able to save the tree. Nothing could distract me at that moment. Nothing at all. I was totally into that last battle.

The illustrations are fabulous once again. Tons of details, wonderful scenery, fabulous to see the characters.

So, I would highly recommend this book to everyone. Believe me you won’t be able to stop reading this fun, magical, dragon-filled and candy-filled, story. I can’t wait for the next book!