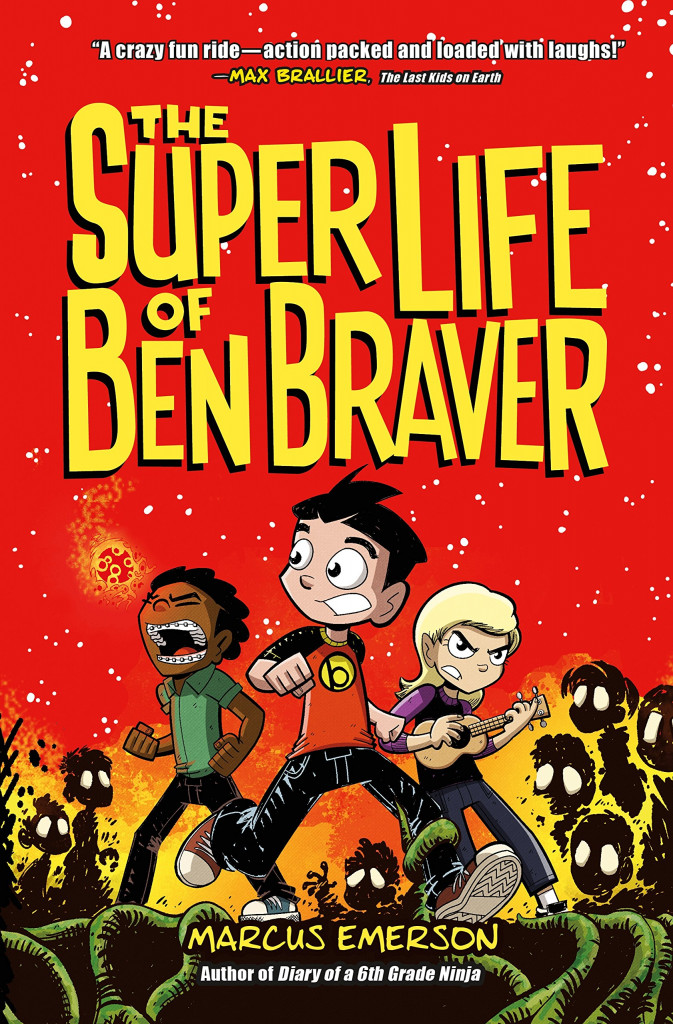 I spotted the second book of this series on Twitter and had to read the first one. I just love books about kids with superpowers, and this one was just such a delight to read. Though I did feel sorry for Ben, as he is, so far, the only one in the school without powers. Thankfully he has smarts, and can think of best plans, but of course… he still wants powers.

At first Ben’s life is pretty unremarkable, he loves comics, he dreams of superpowers, he loves sweets (though his kind of sweet is one I will never eat, peanuts are death), but then one day he decides to save a kid from a bully and suddenly he finds out that superpowers are really real. I loved his reaction to it when he was told (as soon as he woke up), and I also loved his enthusiasm. Yes, it wasn’t going to be easy given that he has to leave his parents and go live far far away at a special school. But he is going for it, one of his big dreams is coming true after all. It was great seeing him get used to this new school, make friends, meet people who he can trust, having a great time. He was really adapting, though you could see that he wasn’t always having fun. And I can imagine, if I was that far away from my parents I would also feel alone, even if I had friends.
I still wonder what will happen next book, there were some hints to something, so I am very eager.

I loved finding out why some people had superpowers, and why others didn’t. Apparently everyone who is descended from The Seven Keys has superpowers in one way or another. I was a bit doubtful though about this, given how many kids were wandering around the school, and how long the school has been open. It just didn’t seem possible that only 7 people got such a big family, and that apparently no one is truly keeping tabs on these kids until they show their powers.

I knew immediately what was going on with the mysterious going-ons in the dorm rooms, the sneezing, the toilet flushing, and I was waiting to see how long it would take before the truth would come out, before our characters find out what was going on.

Next to Ben trying out this new school, deal with homesickness, seeing his friends try out their superpowers, he was trying to figure out his own superpowers (and being disappointed quite a bit) and then there was something happening to the students at school. Who is behind it, and what does it have to do with the first few pages of the book (with the big Ben)? I loved how well it was all written, everything felt so wonderfully together.

I loved both Noah and Penny! They were such delightful characters. Penny with her ukulele summoning animals and Noah spitting out fire after eating certain foods. I loved how much they supported Ben, and how they tried to make him happy when it seemed he wasn’t having any powers of his own. They believed him when things hit the fan. It was just so much fun. Plus, along with Ben they made such a fun group of friends.
I did feel sorry for Penny though, thanks to Noah’s firespitting. 😛

The only thing I didn’t like? The bully and his friend and someone else. Bleh. Can we just have a book without dipsticks like this? Urgh.

I also didn’t quite like how the school, instead of teaching these kids how to handle their powers, told them to hide it, to make sure they got it under control so they wouldn’t use it. You can imagine that these kids just tried their superpowers on their own, which is very dangerous. And later on we find even more reasons why you should just train them to use their powers so they know what they can expect, how far they can go. Of course, you can then later teach them why it is important to not throw fireballs around in public. 😛

The ending was superexciting. I already couldn’t put down this book, but that ending made me even more eager to read (if that is possible). There were twists and turns and a supervillain, ah, it was delightful!

I am still curious about the statue (it seemed to chip away each time we saw it).

There are several comics in this book, several about Ben trying to find powers and his friends making up all sorts of weird plans to get him to discover them. Next to these we also have TONS of fun illustrations that made the story more dynamic and fun.

All in all, a very fun book with a very sweet character (you will root for him), a book full of superpowers, comics, and more. Recommended!