Hip hip hooray, welcome to the Release Day Celebration for Beyond the Wild Wood (Of the Trees #3) by E.M. Fitch!

For today’s post I got an excerpt, a giveaway, and more~

Congrats to the author, I hope you have an amazing day today. 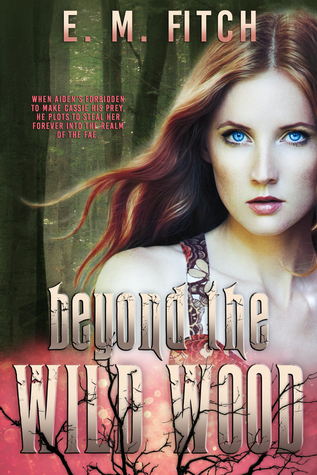 The faery queen has forbidden Aidan from stalking his prey, but Cassie should have known that nothing would keep him from what he wants: to steal her away forever into the realm of the Fae.

Cassie struggles to pick up what’s left of her life, keeping true to her promise to watch over her best friend’s son. But despite the faery queen’s promise of safety, the shadow of Aidan is ever present in her mind, haunting her dreams and turning forest shadows into nightmares. The rest of her friends are getting ready for college, but not her. The Fae haven’t left yet. Cassie knows because Laney lingers still, drawn to the son she gave up, the foliage at his window sill bright green and flourishing at her touch.

Laney’s son is safe in the arms of his adoptive parents, and the babe has Cassie to watch over him from afar. That should have been enough for the new faery, but it wasn’t. She couldn’t let her son go. Laney watches him from afar, motionless, ageless, addicted to his tiny movements and contented sighs. The thought of leaving him is unbearable, even if she knows leaving is the only way to keep her best friend safe from Aidan’s grasp.

When the faery queen’s threat of departure becomes all too real, Aidan takes matters into his own hands, throwing the Fae into a battle that risks their very existence. His action impels Laney to choose which side she really belongs on—human or faery—and forces Cassie to decide just who she can trust, at last, with the truth.

E. M. Fitch is an author who loves scary stories, chocolate, and tall trees. Her latest novel, OF THE TREES, is a Young Adult horror/fantasy inspired by haunted cemeteries and the darker musings of W.B. Yeats. Its sequel, AT WOODS EDGE, will be released in the coming year from Month9Books. She is the author of the Young Adult zombie trilogy: THE BREAK FREE SERIES. Her story, BETWEEN SHADOWS, was recently featured in the Fragments of Darkness anthology; and her new collection of short stories entitled THE VEIL: GHOSTS, GOBLINS, GHOULS is coming soon! She has been published in Pulp Metal Magazine, Under the Bed Magazine, and her short stories RELEASE and THE CREEP were featured respectively in CHBB’s Lurking in the Shadows and Lurking in the Mind anthologies. When not dreaming up new ways to torture characters, she is usually corralling her four children, or thinking of ways to tire them out so she can get an hour of peace at night.

She would have to kill Aidan. When and where felt of little consequence. It was the how that nagged at her. She had approached the others with iron in her hand once before, and that mist had knocked her off her feet before she could even swing. And it would have to be a shot straight to his heart, as nothing else would do the trick.

She wished she was skilled at bow and arrow. Or that she could throw some kind of spear. She had a million and one visions of post-apocalyptic battles and dystopian settings where the heroines could master the ancient arts of ninja stars or slingshots through a cleverly placed montage. She even wondered fleetingly if bullets were made of iron and dismissed the thought almost immediately. She had sat with her father, watching old horror movies, Westerns, and gangster flicks, and even she knew that the slang word for bullets was lead. Pump ’em full of lead, Johnny! No, normal bullets weren’t iron. And she had no idea how one would go about making a bullet …

“You’re a million miles away, Cass,” Ryan murmured, his mouth hovering just over the shell of her ear. She sighed and turned toward him. In the darkness, his eyes took on a glimmer.

His lips crooked in a sad smile.

This, at last, was the truth. Ryan seemed to sense it. He brought his fingers to her jawline and angled her into his kiss. His lips were warm, though the tip of his tongue was cold. If Cassie were to think about it, she’d have known it was due to the ice cube he’d just crushed between his teeth. But she didn’t think about it at all, just reveled in the warm and cold sensation of his mouth pressed against hers, and in how easy it was to be transported from her thoughts, the theater, the world around her, when Ryan brought his lips to hers.

In that moment, something shifted inside Cassie. She didn’t know it then, but she would soon. It was in that moment that the idea rooted and began to grow, and she began to understand how to destroy the faery king.