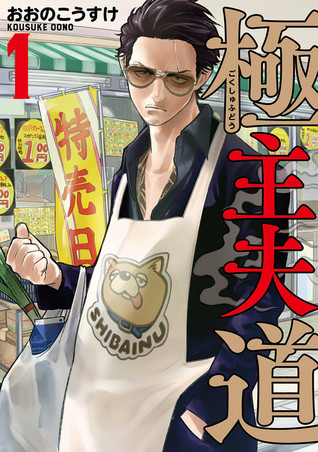 Tatsu is a very feared Yakuza, but don’t worry, all he wants in life now is to be a good househusband. Will Tatsu be able to do that?

I have seen a lot of people talk about this manga on Twitter and I was eager to try it out. Today I was in the mood for something silly and fun, which I could use after almost 2 weeks of continuous work on my new home + packing up stuff in my old home.

And I have to say it was very funny at times, mostly to do with how Tatsu does his cleaning or how he goes about doing chores and shopping. He takes it all very very seriously. Too the point of it being over the top. It may have to do with his clothes, the only cute thing, the only normal-ish thing is his cute apron that he always seems to wear no matter the place. But we find out that it is mostly his very scary face. Really, the dude has a murderous facial expression and he looks ready to murder anyone no matter what. I guess he should learn to be a bit more natural and less threatening. 😛

I am wondering how the guy snagged a girl like Miku. Don’t get me wrong, they do seem to match together (super strength for instance), but seeing them together a few times… I just don’t see the spark. There is no romance. It rather seems like they are best friends. Even the birthday thing was way too awkward. I get he is ex-yakuza, but come on, this is just such a basic thing, why did he make it so awkward. How did they get together? How did they get married? Was it arranged? Maybe we will get a backstory, but I am not sure if I even want to continue.

The jokes fell a bit short and at times the chapter was over just a few panels after the joke which just felt weird. I kept expecting more, was just in the joke, and then it was over and we went to the next chapter. Like with the first chapter, he is on his way to give his wife lunch but it ends with the house husband bribing the police.

But there were still a few parts here and there that had me laughing aloud. With that vacuum and his cat, that was just glorious.

We also meet several people from the Yakuza (because Tatsu is still Immortal Tatsu, feared by many) and it was pretty hilarious how those meetings ended.

The art was pretty good, the artist really captured Tatsu’s expressions and tattoos perfectly, and also the food looks perfect.

But I am just not sure if I want to continue. A bit too much hit/miss for me.