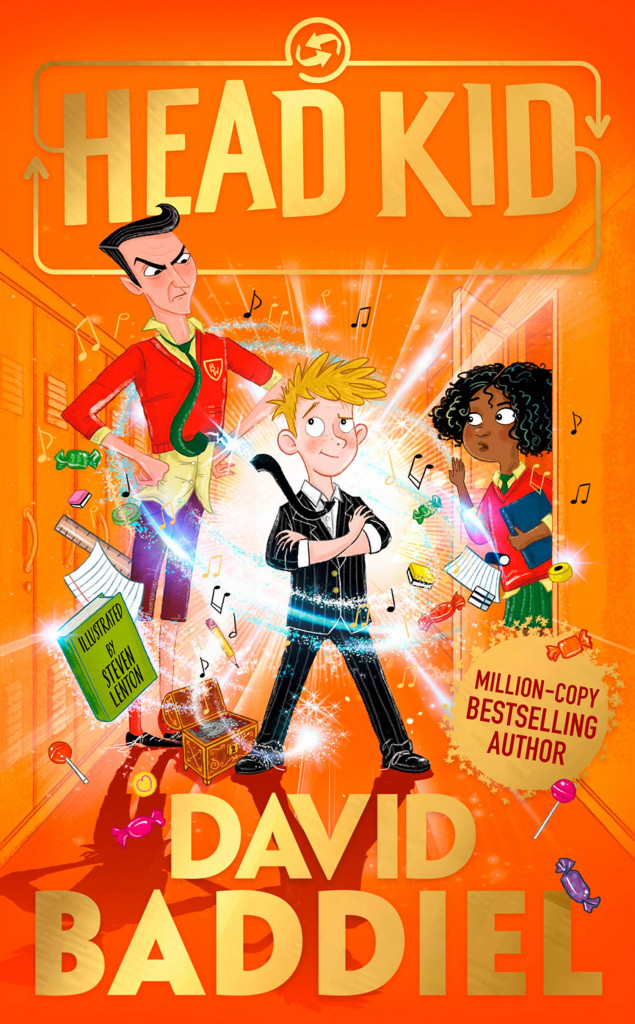 What happens when a strict head teacher gets body-swapped with the biggest prankster of the school? Find out in this hilarious, laugh-out-loud, OMG no he didn’t, will someone find out?, book!

I have been trying for a few days to write a review, but for some reason it just doesn’t want to come out. But today feels like a good day! So here we go. It will be a good/not so good review as I have a hard time forming a coherent review otherwise. 😛

Good:
-The body-swap and how it happened. I am curious about the music box and how it came to be there, who put it there, what kind of history is behind it? Did other people get body-swapped as well? Is that why it was hidden? But there was no note or whatsoever to warn people. Mm.
-Seeing the other characters from the other Baddiel books pop by. So much fun and it makes me happy that while their stories are over they still get some spotlight time.
-The things that both of the characters did in their respective new bodies. How they just tried to continue on with their lives. I had such a laugh that Ryan just bought all the pizza he could while in Mr. Carter’s body. 😛
-The character growth for both of the characters. Ryan learns a bit more responsibility and kindness and understanding. Which made me smile, as he was quite the prankster in the beginning without any regard of anyone. It took him a while though. But that made it all the better when he showed that he could also be caring and kind.
-Dionna, the best friend of Ryan. She was such a sweet and wonderful character and I loved how, when she found out about Ryan and Mr. Carter tried to help them out. Though it must have been awkward as it looked like she was talking to a 40-ish old man.
-The illustrations, as always they are top-notch!
-Ryan’s baby sister and her not saying the first letters of a word. She was also the one (maybe even the only one) who knew that Ryan wasn’t Ryan after the body-swap. It is amazing how that sister-brother bond works.
-On that topic, how no one knew that something was up with Ryan and Mr. Carter. Come on, the biggest prankster turns stiff and model pupil in a day and the strict head teacher turns into a prankster who cancels schools just because he can.
-The ending was just fabulous and hilarious. I am happy with how things ended and I also loved that plan. grins evilly
-The things Ryan did when he was Head Kid/Teacher. He really made the kids dreams come true, though he must have also known that it wouldn’t hold on that much longer. But he had his fun. Cake mix sounds like a lovely lunch, at least for a day or two.
-The debate, go go Dionna. That was a heartfelt speech.
-Some of Ryan’s pranks. Not all of them, but I did love that putting underwear on turtles one.
-I had such a laugh when Caspar was the teacher of the day. Dang that kid needs to learn another song. 😛

Not so good:
-Ryan in the beginning and at some points in the story. I just wanted to shake him for being so mean to people (the name Bummington is haha once, but after 20 times of it… not so much especially when the guy clearly asks to be called by his normal name and is clearly unhappy about it). And his pranks were really hurtful in the beginning. Really, putting butter on the floor?
-Mr. Carter wasn’t always my favourite character, but I did warm up to him when we found out about things in his life.
-The drama near the end which just seemed totally unnecessary to me and just added to make the ending a bit more dramatic. I am sorry, Mr. Carter, I understand the situation, but what did you want Ryan to do then? Just ignore the message? Leave your mum all alone? Plus, hello, he is an eleven year old boy, though he may not confess to it, he does miss his mom. Come on.

And I could probably name a few more good things, like the general feeling of the book (atmosphere) it was really fun. It is truly a book to read when you need something fun and hilarious in your life. Like I do at the moment with the move happening next week and the wedding in almost 2 months.

I would recommend it and I will be eagerly waiting for the next David Baddiel’s book!