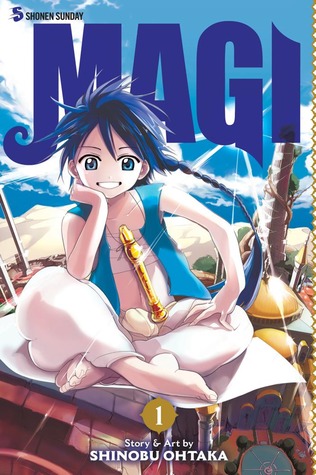 Go on a quest through dungeons with a silly boy called Aladdin.

I have bought this one some time ago for my fiance’s birthday, I thought it would make a wonderful present for him as it was right up his alley in regards to genres. He still hasn’t read it, but I couldn’t resist this one any longer and had to try out. Normally it isn’t my genre, I am not too much of a fan of shounen, but I read that this one also had plenty of magic and silly humour.

And now that I finished this book I can say that I quite enjoyed it… however, I would have enjoyed it more if Aladdin was less of a chibi all the time and just stayed his normal mode. Now it was quite disorienting to see him as a chibi 90% of the time and then poof grown up or teen mode activated. Plus, I liked his attitude more when he was in the normal mode, his chibi/kid-self was just way too childish and annoying. Constantly eating things, acting like a dumb little eh, fondling boobs whenever he has the time (and making up stupid excuses for it often, one such scene was when he just bared the boobs of a “sleeping” girl and was saying he was just doing it for warmth, sure sure).

But other than those annoying moments and wishing he would grow up, the rest was hilarious and fun. I just loved seeing how dedicated Aladdin was to finding a vessel for his djinn Ugo, and how much he cares about that djinn. Not to mention I laughed out loud each time the djinn made its appearance. Since he has no head… you can imagine how that looks. 😛 Everyone is scared crapless each time Aladdin summons Ugo and it had me in stitches. Then again, I would probably also be scared to no end seeing Ugo pop up (especially since he has no head).

We meet several new characters, learn about this place the characters live in, see that people are very curious about Aladdin, learn about dungeons and what they do and how they seem to disappear when someone clears them, and we even go to such a dungeon and see all the chaos that happens there (so much chaos).

The art is pretty decent, with the exception of Aladdin’s tiny mode, I do love most of the character designs, and also the backgrounds are pretty nicely done.

There are still plenty of things I want to see, and I am curious to see if Aladdin and Alibaba will have luck finding treasure without dying. So I will be buying other volumes soon-ish.