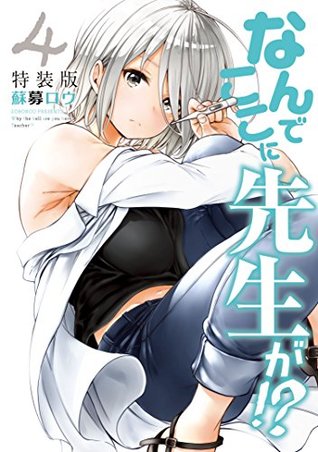 A new couple appears! Ex-president of student council Tanaka and my favourite teacher from this series: Tachibana-sensei.

The fourth volume and I am just not sure if I will continue this series. Don’t get me wrong I just LOVE LOVE LOVE the couples, I am rooting for each of them, and I am always happy to see a new coupling appear with each volume. However…. the ecchi situations are just silly and dumb. It is fun and interesting the first time round, I thought the second time was still funny, but then the third volume I was just rolling my eyes at the stupidity, and at the fourth I just wished the ecchi situations and the silly boob flying around stuff was done better. A bit more casual, instead of over the top silliness. Make the situations more believable. Maybe it is because I am a girl and unless you have a terrible bra all these things just won’t happen. Just like underwear and pants flying off. I get that it is probably meant to be over the top, but still, I wish it was done better. If that makes sense.

I just love Tachibana-sensei though, she is my favourite kind of dere. A bit of a blend of kuudere/dandere. She is cool and hostile, but also adorably shy. I just adored her from the start, because I knew there was more to her than her cool demeanour. And as the story continued we did see her interest for Tanaka bloom, and we also saw her try to have more emotions though it is hard for her as she has been emotionless for a long long time (we even saw a video of her getting a present and not react to it at all, or at least not from the outside).

I had a laugh that Tanaka was saying no to the guys with the sensei girlfriends, but then he falls head over heels with Tachibana-sensei.

I was rooting for this couple to get together because they looked so great together and I felt like they would make a fantastic couple.

Nearer to the end I was shocked when that happened and I felt just as sad as a certain character did. Was this going to be the end? But but! Thankfully, it turned around and we learn why that character didn’t do x and y. After that I was just delighted and happy!

We also have extra lessons, and they are just as holy wow ecchi as the others. But I am also happy with the development that happens in this small extra lesson.

All in all, while I do enjoy these couplings, the ecchi stuff is just way too ridiculous/silly/dumb and after 4 volumes of that it gets boring and samey.