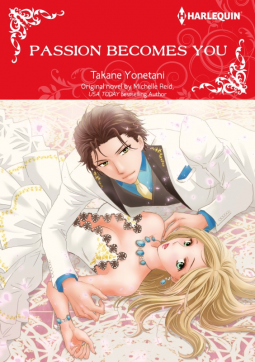 It has been a hard time for me, I wanted to read these so badly, but I wanted to wait until this week before I read them. This week is terribly busy with moving (on Friday), some last packing, some last furniture stuff that needs to be build in the new house, some more little things in the new home. It is definitely the perfect week for some Harlequin manga.

This one was chosen purely because it was the first one to be released. 😛 Though looking at the cover swoons and the blurb I am definitely eager to read this book. OK, the whole playboy thing may go two ways, but I hope it goes the right way.

“Wh-what’s happening to me? It feels like my heart’s going to explode. My whole body is heating up.” That is called love at first sight, congrats. Cupid shot his arrow straight into your heart. Doki doki.

I am not sure how I feel about Cassie. She seems a bit too dramatic to me, and I am even doubting she is pregnant. I am sorry if that sounds heartless, but I am kind of agreeing with Leon on this topic. I have seen this tactic being used a few times already in these Harlequin stories.

Oh my Leon, oh my! I loved his proposition, that is quite a sexy one. I can imagine him snagging women left and right. Teehee. I even blushed at how daring he was and how he held her.

I can imagine she isn’t too happy though, I do love gifts myself, but I can imagine it gets overwhelming to get such expensive gifts every day. Plus, yes, I did think it was creepy that he did research on her. OK, maybe it isn’t too bad that he did, but did he have to throw it all out during their conversation? A bit too stalkerish if you do it that way, in my opinion.

Um, hold on. What is going on? Sorry, but I am a no no on forceful man. If a guy would have talked to me and held me like that I wouldn’t have dove into his bed like that. Especially given that she was still a virgin, it seems a bit weird that after holding on to it so long she would just lose it to some stranger. Even if she were attracted to him.

I did think that things went a bit too fast though. In regards to the love part. Unless more time has past, but for me it felt like mere hours, maybe a couple of days.

Wow, Cassie was THAT, and Josh reacted to it that way. I would have kicked his nuts and not just slapped him in the face. What a dickface. 😐

OH NO, Not again. I am sorry but that last panel on page 66 (for me) was just freaking hilarious. I get that they just had a nice french kiss, but put those tongues back when you talk. 😛

I am glad though with how her best friend/roommate is talking to her, and letting her know that maybe she should let Leon know about that situation. It won’t be an easy conversation, but I did want her to go.

Also what? Why did Trina do that? Didn’t she want to wait until Jemma had delivered her baby? It seems odd.

There is some more silly drama, because of course why not? We can never truly have a happy ending in Harlequin without some drama.

The ending was sweet, but I wanted to know about the baby now. Is it a girl? A boy? Twins? Triplets? Hello, you can’t just end it there!!!!

All in all, a so-so manga. The story was rushed, the drama silly, I am getting tired of the , the romance between the characters I just didn’t see it that much (though there were moments here and there that I loved them together). But mostly it felt like a guy who wanted to get a girl and did everything to threaten her to do things with her (yes, I would call the things he said to her threats). The art was pretty cute and lovely.