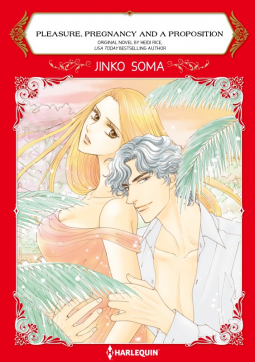 Oh my this cover! That and the fact this one was first up in line to be released out of my Harlequin Manga on Netgalley. The title had me reading with raised eyebrows. What was this title? The blurb sounded really interesting, though I wasn’t sure about the revenge part. I was just hoping for tons of passion and romance next to some revenge stuff.

So here we go~ Follow me as I read this manga.

Dude, creepy. She is in his car and he just tells her out of the blue she is pregnant. OK…. One, how do you know that, just because she changing doesn’t have to mean she is pregnant. Ever heard of girls just gaining weight or other things because of stress, or happy days, or something else? Two, who the fuck keeps track of that, and who the hell is Jack that he finds it totally fine to tell some dude that a girl is potentially pregnant. Three, who takes a girl, against her will, to a gynaecologist because pregnancy tests aren’t reliable and so you must get an exam.

Then of course, because hey, this is Harlequin, she is pregnant. What the actual fuck? And twins? What the even more fuck? Do these people really not know how the pill works, or condoms? Or anything for that matter. I am sorry, I do realise that anticonception stuff only works so far, but still, it is so magical that in every Harlequin these girls get pregnant (often after just one sex session).

And then, instead of letting her absorb she is pregnant with kids, they need to go to his home and talk it out? Hello, what?

Oh, sure, time skip so that we can finally see how these two got together. And what brought them to that moment in the previous pages.

Um, I know that us girls can have problems with orgasms, but still I found it a bit shitty of her that she, until she met Luke, was just pretending. Seriously? You haven’t had a good fuck since that dude magically pops out of the woodwork? How?
But, we do find out that, thank heavens, they used a condom. But of course, Harlequin fashion (the girls need to get pregnant), the condom broke. Gee…

groan That drama.. So that is the only reason that they broke apart? Because she wrote an article, he was pissed, they ended up having sex (and yes, I believe him that he forgot about the revenge), and then there was an argument. sighs People. Just talk. Like adults.

And we are back in the now and he is up to his seducing tricks again. Even having called her work to have her have a week off. What? I am not sure how it works in Harlequin world, but one can’t just do that, she worked hard for those days, and I sure as hell don’t think she wants to lose them to you.

Go Go Louisa, tell him that you have boundaries. Though a shame that she was still very eager for him to touch her. sighs Mixed signals woman.

Teehee, they are teasing each other now. Even though I am not a fan of this couple, and I also think that Luke and Louisa should make up their minds and talk normally like adults (without all the sexy flirtiness and marriage proposals from Luke), I do like how they tease each other.

It is backstory time for our characters. Not that much interested in them though. But I am glad that the author added it.

I feel that they gave in way too fast. But OK, it is cute. I do wonder what kind of drama we will have soon, as it is almost page 80/90 and that generally is when we get some silly stupid drama so we can go to the big happy ending.

Yuuuuuuuupppp, here is the drama, and it as dumb as so many of the Harlequin manga. Dear Lord, are these people teenagers or something? Luke is just being a dick, I get that his past is not a fun one, that it was a harsh one, but still, he must also see that he is hurting Louisa with his mixed signals. He wants to marry her but just for the babies. He calls it an accident. I just wanted to hit him so hard. Bleh.

Dude, yes, you are the father, but you clearly didn’t show any care or love for Louisa at times, and you really hurt her. Did you think she would just casually call you or let you know anything? No. You ruined that. You have to do a lot of grovelling to make it up again. So don’t act like you have all the right.

“Where is the woman who looked me in the eyes with that bright smile on her face?” Well, look deep inside of you, you will find the reason very soon.

Aww, boohooo, you don’t think you can do it. You don’t think you can love someone. Have you tried? Instead of being a bully and meanie and giving totally conflicting signals? See, if you had said this before, I would have been a bit more compassionate about it, but now? Too late, and way too conveniently located near the end of the manga. They finally have the adult conversation they should have had on page 30-50.

And sorry, the ending? With all that crap? It took way too long for me, and now it just felt way too convenient. Oh they had the big talk, now let them get married. Right after that moment. rolls eyes Sorry, today I am so not into this kind of thing. Maybe I would have been more forgiving if I didn’t have a burning headache and am in the middle of getting ready for a big move.

That last scene was adorable, though I wonder how many more kids they are going to get. 😛

The art was really good, and I loved the way the characters were drawn.

But yeah, a bit too silly dramatic for me. I did see the attraction between the characters, it is just a shame that bad talking and drama got between it for most of the time.