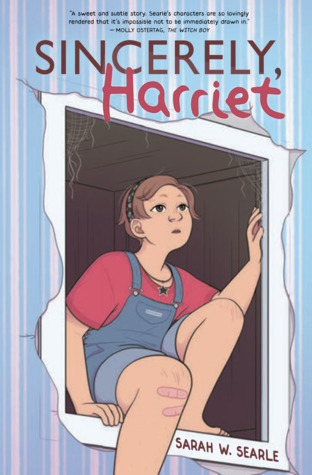 I was quite intrigued by this cover and also by the blurb, I just had to try it out, and I am glad I had the chance to do so. However, it was hard to read at times, at times I was annoyed with Harriet’s parents, other times with Harriet for not telling her parents what was going on (not just how she felt but also that her body was once again doing things that it shouldn’t do). Plus the art….

But in the end, I am happy I have read this book as it was pretty gorgeous in the end. Not only is it about Harriet, how she had to move to Chicago and leave people behind, about her illness (which at first is unknown but then we slowly find out what is going on), about her “friends” at the camp, about her imagination), but also about the older lady who also lives in the house and about her son (who had polio back in the 50s).

I loved how the author wove both of these stories and made them just click together. How both of these illnesses made these two characters connect even if they don’t know each other. Harriet has MS, Nicholas had/has polio. Being a kid and going to teenagehood isn’t easy, and especially not if you have an illness. Harriet wants to make friends, but how is she going to do it if her body keeps failing, or what if she is having a sleep over and her body betrays her and she pees in a bed/sleeping bag? She is worried about things, and I just wanted to hug her.

The parents were really nice, but I was sad that they had to leave Harriet alone so much. Especially now so soon after the move and with Harriet’s body not doing well. She really could use someone to be with her, so I was glad that she found someone in the older lady downstairs.

As for the topic of reading books for school, I do know all about that, it really destroyed my liking for that sort of book (the classics). It made me like reading a bit less. Plus I can only think back to those books with a form of dread. Being forced to read a book is just a no-no. So I am glad that the old lady understood and tried to help her out.

For the title? Well, she is writing letters to Nicholas, which I found adorable. I was happy that she could tell her feelings to someone, even if it was just on paper.

The art, well, it was pretty nice, but I just didn’t like how the characters went from looking very young to very old. At one point Harriet looked like she was in her sixties instead of being a teen. At times she looked more kid than teen. It just wasn’t that consistent.

But all in all a beautifully told book. I am delighted I had the chance to read it.