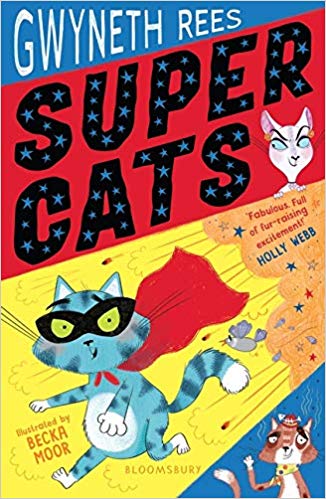 A purrfect and cattastic book about cats with superpowers. Yup, cats just got way more awesome and they were already super. 🙂

I just couldn’t resist this book, for one it has Becka Moor (fabulous illustrator), for two cats with superpowers. This book was needed very much in my life.

Meet Tagg, our protagonist and the kitty who will do great things in life. He just needs to find out what powers he has first. I loved Tagg from the start and loved how, despite having no powers for quite a bit of the book, he dives headfirst into helping out when super cats are disappearing. He knows it will be dangerous, but he wants to help out!

He is not alone in helping out the super cats, he has a new friend. I was at first worried about her, how would she turn out, but she turned out fabulously. I loved her name, Sugarfoot. She is named because of her one white foot, which I found an adorable way to name a kitten.
I loved how she and Tagg formed a great team and I feel that in the future these two will be teamed up often and become a great team.

The book isn’t just about super cats and their disappearance, but also about finding your powers and wondering what you would get. Tagg and Sugarfoot are both figuring out what their powers could be, and eventually when they get them learning on how to use them. We also see various cats with superpowers (and one cat who can’t use his superpowers any more) and I loved seeing the diversity in them, even though some have some powers that seemed pretty useless (at least at first). Then again, I wouldn’t mind a tongue that heals people (or at least makes it so that they don’t die instantly).

The whodunnit, the evil of all evil, I knew when we met that cat that it was them who was the mastermind behind this whole thing. Despite an easy villain I still loved seeing their plans and see what kind of things they have been up to. They were quite a good villain, though I do think it is hilarious that those kind of cats are often the villains or working with villains.

There is also the reference (or at least I am guessing it is) to One Direction, this time with cats of course.

The ending was fun + very exciting as tons of things happen. And no, I won’t tell you what kind of things, but believe me you will be on the edge of your seat.

The book is illustrated by Becka Moor, and I just love her work in this one. Well done!

What a delight it was to see that this book will be getting a sequel, I can’t wait to see what adventures Tagg and Sugarfoot will be having in the next book.

All in all, I would recommend this hilarious cattastic superpowered book! Fun characters, fab illustrations, superpowers, and tons of cats.