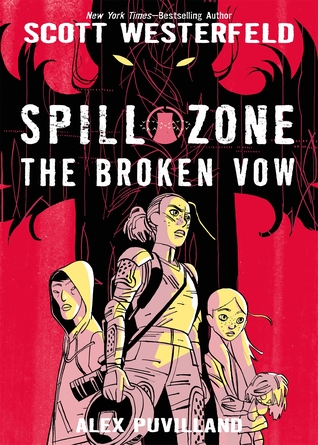 It is time for everything to end, but will it all end right? Or not?

The final volume in this series, at least I am guessing there won’t be any other volumes, even with all the twists near the ending (including a big one on the last page). In this one we meet with Jae (our Korean guy who can float and has a very close connection to the spill) and see how he meets Addison. We learn the truth about the night the spill happened near where Addison and her sister live. We learn more about Vespertine (and I still don’t like her and how controlling she is) and what is going on with the spill.

It was all very exciting though I did think that Addison made some terrible decisions in this book. What she did to the doll that was possessed with Vespertine, what did she think would happen, that things would just go happy and yay? I don’t feel this is a spoiler, given how things concerning the spill are reacting to things. Then she sold that to those people, which seemed like a pretty terrible idea, but I have to say I can imagine why she did it. She wants a good and safe life for her sister far and far away from any spills. I can also imagine that she is angry with Vespertine (and also with her sister in a way), but still I didn’t think she had to be so aggressive about things. I get that you are hurting, that things are not good at this moment, but no need to get so angry.

It was great fun + interesting to learn more about the spill. How it is in Addison’s country and how it is in Jae’s country. Because there is quite a difference between them which has to do with various elements and reasons. I soaked up all the details and was delighted that we finally learned more about them.

Lexa got quite a bit of the spotlight this time, and while she isn’t my favourite character, I think it was a good idea to give her a spotlight as she plays a big role in this story and events taking place in this book.

The ending? Holy wow. There were a few things I wasn’t happy with, certain twists that I was hoping not to see as I wanted a nice and closed ending. So either we are getting another book, or the writer just likes adding twists to end a story.
It was quite a nice addition that we got a 3 years after part and see what happens there. See the characters grown up, but still with certain things in their lives despite where they are living now.

The art is still pretty nice, I quite like the style of it.

All in all, this is one series I would recommend, it has some fabulous moments, tons of creepy going-on’s, powers beyond imagination, great mystery, good characters. And I would say that you are best to read this one in one go. Though I did enjoy reading it with some time in between (thanks to the libraries taking their time) I think it would be even better had I read it in one go.