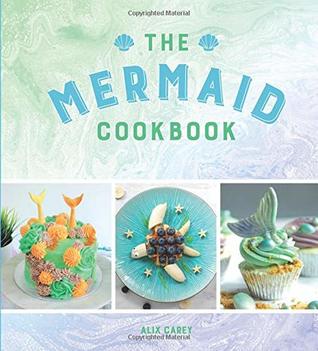 I just adore mermaids, so I was very eager to try out a cooking book full of Mermaid stuff. Sadly, I am a bit disappointed.

Quite a few things didn’t have to do with mermaids, or were just called mermaid, but seeing the mermaid wasn’t so easy. I am guessing some just had the colour scheme going on to show it was mermaid-esque. There were several more under the sea stuff (sharks/coral/more coral/stars), that sure, would fit with the mermaid theme, but I would rather have had the book called Under The Sea then. I know harsh, but I recently read a book about Unicorn food, and that was totally unicorn-esque. I was expecting this one to also be 100% about mermaids. Not every other creature or thing in the sea.

Still, I had fun reading the book, and my tummy is definitely rumbling now. I so need something yummy now.

I did find a few mermaid things that I do want to try out one day. Like the first drink of the drink chapter, the mermaid cheesecake was just beautiful, and I wonder if I can make it, and then there dive into the ocean cupcakes,

Plus, sorry have to be honest here, some things just didn’t look that nice. The octopus looked more like a jellyfish, the fish doughnut looked more like a Sesame Street character.
And come on, Octopus Arm Churros? Those were just normal Churros.

I did like that there was so much variety in how hard the recipes were, some seemed impossible but some seemed very easy. Clear what you need, and also clear info on how to make things. I also liked the little introduction at each recipe. I am however not sure if most people would be able to make some of the things in this book, as I said, some do seem a bit too impossible. I can see some of these ending up to look like the end results of contestants in Nailed It. 😛

I do want to compliment the author on using normal/standard ingredients, not sure how to word it correctly in English. So many cookbooks go for healthy and OMG you can’t use milk or sugar or flour because they are bad, and sure, eating cake every day is not the best idea, but I don’t see what is wrong with a sugarbomb of a cake once in while.

But there is one more thing that I found a shame, and that is finding out that several of these photographs are from Shutterstock…. Yep, that is right, several of these aren’t even her works? Feels kind of like cheating, and I would rather have seen what she made.

In overall, I am still happy I read this book, it was fun, and I am hungry now.