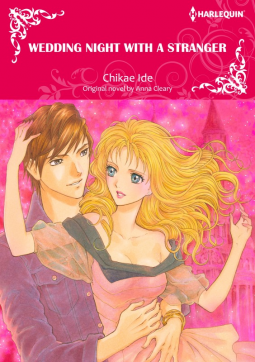 After this one I have just one more Harlequin manga to read, but that one will have to wait until May (when it comes out). So first up this one! About a wedding night with a stranger, oh my. About a girl kicked out, oh no. And then there is the cover that makes me happy and smile.

Ready to read my thoughts while reading? Let’s go!

It starts with her wanting to jump off a building because apparently there was a scandal (though I am sure there is more to it then what we read in this intro), and then her meeting the very hot and sexy (but also cold) Sebastian. Who tells her they are set to get married. Yep, arranged marriage time~

He gives her sweet compliments, and then ends with: “I wish we met a different way.” Aww, that is pretty sweet. He wants to have a chance with her.

snorts Um.. That newspaper title is a bit off.. “Ariadne, Adoptive daughter of shipping company, engaged to Demetri Spiros.” Now I know we have anime about shipgirls, but this is taking it a bit too far? 😛

We get a bit of a backstory on Ariadne, but once again, much to my chagrin, we don’t get to see what truly happened on that wedding day. Tell us already! I know we are only 24 pages in, but come on, all this teasing and hinting is getting annoying.

Wow, her uncle and aunt are pretty heartless. Instead of sticking to her side, they just kick her out and throw her for some random dude? What the hell?

snorts Wow, that is a pretty big bitch move. So you are marrying him.. so you get your money? Because boohoo, you have no money and instead of thinking of getting a job you instantly think of the inheritance. Girl. I had thought you were better than this. But I am at least glad that she is honest about it with Sebastian, I would have disliked her further for this if she hadn’t told him about it. I did have a laugh that they both were attracted to each other. At least that spark is there, now they just need to unfake this marriage.

And there is the wedding night. Well, it wasn’t with a complete stranger as I thought it would be from the title. OK, it has only been two days, but given the title I had thought they only knew each other for a few hours or maybe not even that.

FINALLY! After all that hinting and teasing we find out what happened during the wedding day and what Ariadne saw. Dang, I can imagine she was shocked. And Demetri was a true dick then that he did that. 😐 Not classy dude, not classy at all.

Awww, I just loved the moments they were together after the wedding happened. They really have a click and I just LOVE the sparks flying around when they are together.

But I knew that there would be drama and tension soon, and there it is! Dang, Demetri, I already hated your guts but doing that to your ex after all that crap? Wow… Holy fuck by the way, he went way way too far.

We find out what Sebastian’s secrets are and my heart broke for both him and Ariadne. Ariadne because she knows she has to compete (that is how it feels) with that person, and knowing that sometimes he leaves her for that person. However, I wished she had talked to him instead of doing what she did now, it just didn’t make sense and seemed silly. Plus, given the whole Demetri situation it also seemed dumb that she would just go out alone without any protection. 😐

Oh my, that changes some things to the situation. Though still I would have liked her to at least have stayed somewhere safe.

I am glad with that talk, and also the explanation on how things earlier got changed. Go go Sebastian, that guy is amazing.

Also I laughed so much when the aunt and uncle visited and dearest aunt found out certain things. Oh, man, that guy is sleeping on the couch for the next weeks.

Awwww, that ending it had me in tears. How lovely! How sweet! It was just perfect, and we also get an explanation on why Sebastian went to the attic. That explains a lot, I can now imagine why he did that. I would have done the same thing in his shoes.

All in all, a lovely manga with a couple that was just too adorable together, they had such amazing chemistry. Sure, there were some parts that had me rolling my eyes or that had me cringing, but for most of this book I was just rooting for these two to be together. I also loved the story about Ariadne, not this one but in mythology. The sex scenes were just perfect, though maybe a few too many flowers for me. The art was really good!