Welcome to the Release Day Celebration for Nicole Conway’s newest book: Legend! I am delighted I can be part of the celebration. parties

For today’s post I got information on book/author, I got an excerpt for you all to read, and oh yes be sure to participate in the giveaway.

Before we start, happiest of book birthdays and many congratulations to the author. I hope you have an amazing day! 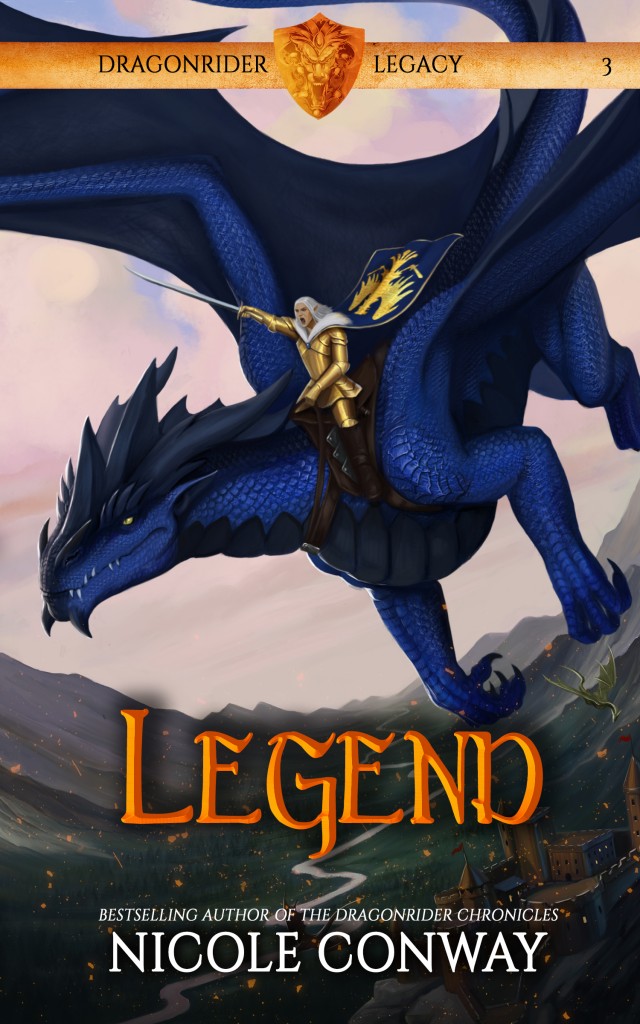 In a war of gods and tyrants, the will of the dragonrider must never falter.

Captured and tortured by the brutal tyrant, Argonox, Reigh’s worst fears have now been realized. Argonox has successfully twisted his mysterious dark power for a truly evil purpose—reanimating the long-deceased legendary dragonrider, Beckah Derrick, and her monstrous king drake. But Argonox’s cruelty won’t end there, and Reigh fears the worst is yet to come. Rescue is unlikely as the Tibrans prepare to make their final strike, poised to break Maldobar’s ranks of proud dragonriders once and for all.

With many of its cities already captured by the Tibran Empire, all hope now rests with Jaevid, Princess Jenna, Phillip, and their mismatched band of dragonrider allies to lead the last stand and save their kingdom. Even in such frightful times, Jaevid may find he still has a few old friends ready to take up their weapons and stand at his side again. But facing down Beckah is perhaps the one thing that might break Jaevid’s resolve. Can he really strike down the woman he used to love in order to save the kingdom?

One final battle will decide the fate of our heroes. Can the strength dragonrider prevail once again? Or will the Tibran Empire become Maldobar’s new legacy?

Straight ahead, a Tibran soldier closed in on a young woman clutching a squirming bundle of muddy cloth against her breast. Sword drawn, he reared back as she stumbled and fell, covering her baby with her body as she screamed. Heat and rage flushed through me, coursing along every nerve and setting my brain ablaze. I unbuckled from the saddle, giving Phevos a quick pat to let him know I was going in.
He chirped and ducked lower, angling himself with one wingtip barely brushing the earth. I hopped out onto his wing, using it like a fabric slide to land in a crouch less than ten yards from the soldier. Not a second to waste. Drawing my remaining blade, I rushed and sprang, kicking both feet hard against his back. One swing, swift and relentless, sent a spray of blood through the air. The soldier’s body hit the ground with a thud and didn’t move again. I landed in a crouch, shaking off the pulsing rush that still hummed through every muscle as I stood. The woman let out a desperate cry as she looked up at me, tears leaving clean streaks down her mud and soot smeared face. “H-help us! Please!” I threw back the visor of my helmet, revealing my face
to her. Her eyes went wide, mouth dropping open as she stared upward. I assumed it was because I was a woman. It was still shocking to a lot of people, particularly the common folk who didn’t get to see a lot of battle or training firsthand.
I assumed wrong.
Behind me, a resounding bellow shook the ground under my boots. I turned, catching a flash of blue scales an instant before the ground nearby exploded into flame. The blast incinerated a group of Tibran soldiers coming straight for us with crossbows at the ready. They didn’t even have time to scream.
“I-is that … ?” The woman gasped.
It was.
Mavrik descended into the thick of the fight, his leathery black wings cupping to form a shield from incoming arrows and orbs as his rider dismounted. When the huge blue dragon rose up again, his saddle was empty. He threw back his head, black horns flashing in the setting sun as he shot a plume of flame straight up into the air. His wings unfurled, and Jaevid Broadfeather strode onto the battlefield with his scimitar in hand.