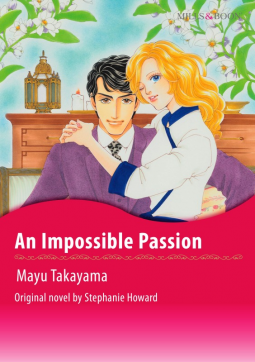 Welcome to a new round of Harlequin Manga! There were a bunch up on Netgalley again and I couldn’t resist requesting a few of them. Well, a few… 12. 😛 So be prepared for the coming weeks, they are going to be filled with Harlequin manga!

As with all the others I will be writing this review as I read. So come with me as I explore this manga. The first one! With a pretty nice cover, which is even nicer if you flip open the book (or in my case scroll through my ADE). The blurb also sounds interesting about a girl who has a catering company, or I should say had as she closed it down, meets a client who won’t back down and then asks her to move in with her. I am kind of wondering how this is going to work out, and why he is so pushy, I guess I am going to find it out… right now.

We start off on a sad tone as we see our MC lying on the floor thinking about her life, how she lost everything. I have to say that the sad tone was quickly lifted when I saw her facial expression as she visited Mr. Davidian’s house to cancel the appointment. Are we going to see more of these expressions? I hope so, though I do hope that they aren’t ruining any moments. Just as I say this and flip to the next pages we get some more hilarious faces.

Meh, I am not a big fan of the guy. He is rude, mean, and sorry why is he poking into her life like that? Then again, I am no big fan of Joanne either now. Dang, girl, stealing the boyfriend of your partner, bitch please.

I do feel sorry for Giselle that she has to take this job. While the guy is at least so kind to help her out I still feel it is too much for her. I hope she can get it together and that she will deliver a fabulous meal. Go go Giselle! You can do it.

And she delivers, just as I had hoped. Though she went much further and I was just so impressed with what she did, mostly on her own. Dang, that is awesome. She is just sparkling with motivation and get-going attitude. I am loving this girl.

And then we get to the point of the blurb, him asking her, quite awkwardly if I can be honest, to move in with him. We do find out why, he needs a chef and he is, just like I was, clearly impressed by her work. I was a bit more enthusiastic about him, though he made it worse again with his comments. Please, dude. Have some class.

As expected though, she takes the job. And she is more than eager to try to be a good cook. The clients are now a bit more difficult to handle than what she is used to. No pork, no alcohol, halal, seafood is OK. Then there are some clothing requirements.

I loved how she went the extra mile though, instead of just following those requirements, she tries to do a bit more by cooking the Arabic way (though of course one just doesn’t do that in one day, but still I was very impressed). It was quite surprising to me that our arrogant dude was able to make coffee. 😛

Things escalate, and while I do understand her feelings on the matter, it is a custom. You can’t just expect them to throw it out when they visit. While the conversation between her and her new boss was a bit eh, given how he grabbed her, I am still happy that he was able to say what he wanted to say. Later on we also get her to question things, and again, I can understand given how her life is, but still. I gained a bit more respect for our guy though when he said this: “What is true freedom to you? I think it’s to be tolerant of other people’s beliefs, as well as your own. There are many cultural beliefs in Middle Eastern society.. and some are hard to understand. But don’t you think it’s the same in European society?”

Haha, I had a laugh that our girl immediately thought it must be a lover that our guy was eager to meet again. I knew quite fast that it was something else entirely. She was adorable though! I have to say I was wondering what her thought are on the fact she only sees her dad so little.

Finally, after 87 pages we have a bit more action (no, I am not counting the kiss from a few pages ago, she was asleep) between the two, and I did think it was high time for them to go to a new level. I had a laugh when he had to tell her he was hitting on her. 😛 Girl…
Though I did think it went a bit too fast, they have only been living together for 2 months. But, as I could have expected given the page number, there is drama and we solve two mysteries. What happened to his wife and why isn’t he seeing his daughter more. Poor dude.

Aww, good girl Rasha! She trusts our MC enough to do that, and thankfully our MC is a girl who is eager to help out. I did think it was a bit silly how things escalated though, but that is Harlequin Manga for you I guess.

But I did love the manga, and probably because my marriage is only about 2 and a bit weeks away I was crying. It was just so sweet. Yes, there were some issues, but I am happy with this happy ending. I am happy that these two found each other and I hope they will be happy together.

All in all, I really did enjoy the story. Yes, I had some issues with the guy, but he shows his true colours and you learn more about him and I started to like him. I loved the girl from the start, I hope she is able to do a ton more of cooking. The romance is a bit low, it could use more in my opinion, but I am still happy with how it was developed. Not instantly POOF, but slow and sweet. There is some silly drama (as expected), but there is also a sugarsweet ending that will make you smile (and cry if you are an emotional wreck due to a wedding, like me). Recommended.