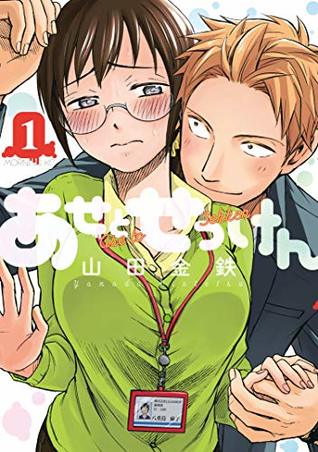 A girl with a sweaty problem, and the guy from her work who doesn’t mind her smell he just gets inspiration from it. A bit awkward at times, but you will also root for them as they get together.

I bumped into this one while browsing for new manga, the cover was quite hot and I was also interested by the premise of the book. How would this romance unfold and would he really not mind her sweating so much?

Ara ara this was just the cutest! Sure, at times a bit cringy and other times also a bit dicey. But quite quickly they became a couple and I was just rooting for this adorable couple.

Our girl has a small, well big problem, she sweats from even the slightest of things and is quite bothered by it. She remembers that as a child she was bullied for it and even had a nickname. She tries to cover it with all sorts of products, a lot of them from her work (though she is just an accountant there). So with that she is quite knowledgeable on what to use, how to use them best, and when to use them. She even has some tricks and tips (which she will later share with scent guy). One day at her work while drooling over new products she gets sniffed by a random guy who turns out to be from the product development team. You may imagine her reaction to it.

And yes, in the beginning I was quite uncomfortable with him just sniffing the girl, even pushing her against the wall, or holding her tightly. I just wasn’t happy and I was thinking that he was quite creepy for doing this. Can’t he just think of another way to get ideas for smells? He even has the guts to ask her if it is an unpleasant feeling having someone sniff you. Um, dude. Duh. How would you find it if the roles were reversed?
But as soon as they fall in love (pretty fast even) I didn’t mind the sniffing that much. Weird how that works, right?
I did think it was funny that he was able to discern her feelings by her scent. For instance when they had a fight he could tell she was hiding something/acting like everything was fine.

I loved that they didn’t take super long to get into a relationship. Yes, maybe it was a bit fast, but as someone else also said somewhere and I agree, it is good that we finally have a relationship that doesn’t take ages and volumes to happen. Sometimes relationships happen fast, and this couple was quite cute together. There were even some sex scenes that were very swoony and nicely done.

I was definitely rooting for this couple and I am curious to see how it will go. I am happy that the guy doesn’t mind her sweating much, and that he is sweet about it. Even gives her new products to try out because he knows she is still bothered by it and knows that she will be happy to try out new things. 🙂

The art is just fabulous! The expressions on the characters are so well done.

All in all, this is one series I will be continuing.