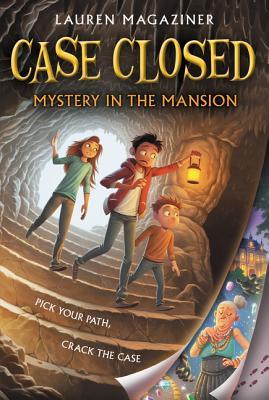 Can you figure out the mystery or will you bump against a dead end?

I just adore Choose-Your-Own-Adventures and so I could resist this fun looking book promising tons of mystery. I first made a chart with the help of my fiance, and we had fun finding all the exits and listing them, and then came solving all the puzzles. Yep, there are puzzles and we both went to working on figuring them out. Some were easy, some a bit harder. For one we had to use the help, but the rest we were able to figure out on our own. So, chart ready it was time to pick a route (there are 3 main ones) and get to reading.

I know, some may think a chart is cheating, but I have noticed I get totally confuzzled when reading these kind of books and just tend to give up after finding one way. So charts it is! I love these books, but there are so many possible ways you get lost.

In this one our MC, Carlos, takes on a big big case when his mom falls sick. Things have already been dicey at their home with not much money to spare and a job in danger of falling apart if they don’t take this case. Luckily for Carlos’ mom Carlos is eager to solve the mystery and he brings with him two friends Eliza and her little (slightly annoying) brother Frank.

I first picked one route which mostly didn’t involve much treasure hunting and was more about finding the culprit and then coming across the treasure. It was quite an exciting first route to pick and I had fun investigating with Carlos and his friends. Seeing what all the suspects were saying and what clues we could find. And then finding the ending, which of course means that the case is solved and that his mom’s detective agency is saved.
After that picking a second route, this one with more treasure clues and treasure hunting. I have to say out of the two I liked the second one much more. I love chasing after baddies but treasure hunting and finding clues? So much more fun.
I still have one smallish route to follow, I will get to that one later, kind of curious to see what kind of things we will discover in there, oh my! And yes, I haven’t read it yet, I know, but the outcome is the same for all the rounds, so it does get a tad boring after reading two out of three.

I wasn’t a big fan of Frank, but that is because I generally am not a fan of little brothers/sisters tagging along and not having a clue when to shut up. I get that he is a small kid, and he does act perfectly for his age, but still, I just can’t stand them. Sorry.

I love the friendship between Eliza and Carlos, they made quite the pair and I loved how, when Carlos finally told Eliza about what was going on in his home that she was there for him, and even started supporting him even more (and yes that was possible). Both of them had their strengths that helped them solve this case.

I also liked that days could pass. We start at Day 1, but there is also days 2 and 3. The kids have to recover at times from all the things they discovered during the day.

You had both good and bad endings. Of course, like any choose your adventure more bad than good ones. I have to say that while I did like some of the bad endings, some were just a bit too ridiculous for me (like the one with Antarctica) and didn’t seem to fit the story. Then again, I do want to give thumbs up for being creative with them. You have to come up with something to fill those bad endings and I am sure it isn’t easy given how many of them there are.

All in all, a highly recommended mystery Choose-Your-Own-Adventure and I cannot wait for the next one to come out, I definitely need more of this.

Oh, and if anyone wants the chart, let me know and I will put it up on my blog. <3