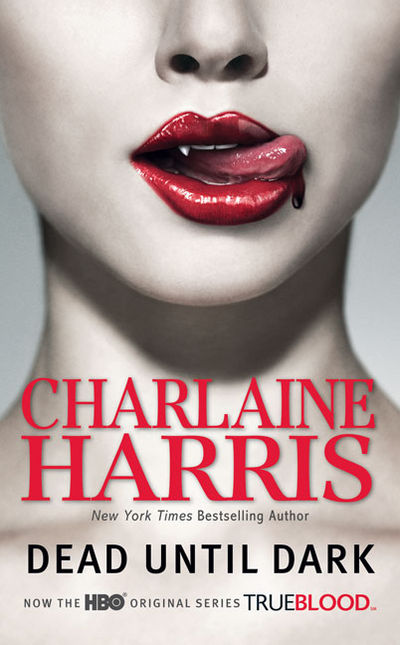 “I snuck a look to see how Eric was taking this, and he was staring at me the same way the Monroe vampires had. Thoughtful. Hungry.
“That’s interesting,” he said. “I had a psychic once. It was incredible.”
“Did the psychic think so?”

I finally had the chance to read/start this series! I have heard tons and tons about this series and I have been curious about it for a long time. Imagine my delight when I spotted book 1 in English in one of my libraries. And this was terribly fun, I had a few issues, but generally I just flew through the book.

I will be doing a good/not so good.

Good:
-Sookie was just so sweet and awesome. I really love a girl like Sookie. She isn’t afraid to open her mouth and give people a piece of her mind. And in the beginning we even see that she is eager to help out, even though she has no skills and just a chain to help her out. Yep, not the smartest decision, but I did like it as it gave a good glimpse in her personality.
-Her powers. Maybe not ones everyone would have, and it certainly hasn’t made her life easy, I still love them as it made her special and gave her a chance to do several things in her life. It was very well written to see what problems she encountered and what tricks she applied to live her life without going craycray of all the voices in her head.
-The mystery! Yep, there is plenty of mystery in this one as someone is murdering women, especially women who are having sex with vampires. Is it a vampire? Or is it someone human? I was on the edge of my seat at several moments of the story, especially as someone is also targeting Sookie. I had fun trying to figure out the mystery, though I didn’t get very far. 😛 Eventually I just let the story take its course and see waht kind of twists and turns it would bring.
-The various characters that we meet. And there are plenty as this is a small town and Sookie knows everyone and everyone knows Sookie.
-Sookie’s name. I did wonder if that was her real name or what everyone just ended up calling her.
-Bill and Sookie’s relationship. He was a bit like the Godfather, I do agree with Sookie on that, however I do think they make a sweet couple. She can be herself with him and biggest pluspoint? No way of reading his mind, so she can just be with him without having to worry about thoughts. Which is especially handy as vampire sex is apparently very fantastic, and Sookie is finding out all sorts of wonderful ways that one can have sex. And you don’t want some annoying thoughts to come in.
-The sex. There are several sexy sex scenes. I loved them. They weren’t too graphic, but still graphic enough that you knew what is going on. There was also some vampire stuff going on while they were having sex, oh my!
-Seeing all the vampires and how they are slowly trying to get accepted into society. Or well, some of them are eager to get back to humans, and some are just eager to ruin everything (there is always someone who ruins it for others). It was interesting to see all the vampires, the vampire club, and even though I wasn’t always a fan of him, Eric. He is an interesting character. I do hope that he won’t be a too big of a bother to Bill and Sookie.
-The ending. Oh my that ending. I already was stuck in the book, but now it definitely didn’t let me go.
-There was plenty of hilarious moments that had me in a laughing fit. I found so many quotes to love. I do love a book with humour!

Not so good:
-Sam. Sorry, I just didn’t like the guy AT ALL. He was annoying, way too protective, pushy. Oh no, Sookie now has a love interest, now I need to make sure she sees me. Yeah, dude, too late. Go away, you had your chances but you decided to not take them.
-Jason, the brother. Dang, I wasn’t a fan of him. He had some kinder moments but mostly I just found him a big ass. The way he treated his sister was just eh. There were several moments that I just wanted to kick him between his legs.
-The fact that Sookie called her telepathic powers a disability. I get that they didn’t make life easier and that things just downright sucked, but still I found it a bit too much to use that word for it.

As you can see, tons of goodies and a few mehs. I can’t wait until I can visit Library #3 as they have the rest of the series. Whereas the library I got this one from only has this one. pouts
I would also recommend this one to everyone it is a fun, sexy vampire read!