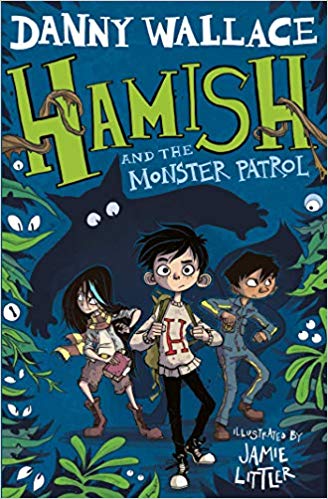 A brand-new Hamish adventure this time with even more monsters, a Chosen One, and more revelations about Belasko and another organisation, the Monster Patrol!

I just LOVE the Hamish books, while it is a bit monster of the week in style (as each book has a new monster threatening the world/Starkley), there are enough twists and turns, new characters, and new revelations, each book keeps you on the edge of your seat. What would happen next? What kind of new things will we learn in this new book?

This one does require one to read the 3 short stories released not that long ago. In one of the stories we learn of Alice’s grandmother and that monsters are truly real. That there are people hunting/protecting them. This one continues that story because in this book Hamish and Alice (and the new character Kit) are going on a quest to find Alice’s grandma. She may be the only one who knows how to save the world/Starkley from a monster that is coming slowly from the sea.

But before that all happens we meet a new Starkley, a Starkley that is in full-protective/combat mode. People are leaving, barriers are made, sometimes supplies of food come in… sadly, mostly boring and bland stuff, there is a curfew, there is a big honking clock/alarm-system, and more. There is a monster coming and Belasko is in full battle/ready mode.
Each chapter we get, often full of humour, told how many days are still left before the monster arrives. Eventually I was looking forward to each new chapter as I had to know what way we would be told about the days this time.

I loved the parts taking place in the Amazon, to see that monsters are real and magic apparently too (though I am still not entirely convinced), to meet a new group named the Monster Patrol. I do hope that the MP is able to grow a bit more than just 2, or now 3, people/monsters. I had such a laugh when Hamish got caught up with a unicorn and that apparently cactuscubes are its favourite.

Meeting Lydia at last, it was wonderful, though I did think it was a bit hilarious on the hows and whats of her capture. It is quite surprising that she is still alive, but then again with her spirit she would survive for much longer. For an older lady she got a ton of spirit and power.

What the monster was and how things went when it finally came to a battle? It wasn’t entirely what I expected, and I was a bit disappointed, but still I had fun reading about the battle.

The ending made me smile and I was delighted that Hamish finally had the courage to tell his friends and that he learned to trust them a bit more. I hope he can learn a bit more from his dreams, it seems he has yet another talent.

Scarmash also makes his appearance, because why not, he is the big villain of the story. I just hope that one day Hamish, his dad, and Belasko can capture him or put him out of the monster business.

And just like every other book this one is delightfully illustrated!

All in all, I can’t wait to see what the next book will be about. What monsters will pop up and what kind of plans will Scarmash make/prepare. I would recommend this fun, unicorns are real though they don’t pop cupcakes or glitter, prawn-filled book to everyone.

9 thoughts on “Review for Hamish and the Monster Patrol”