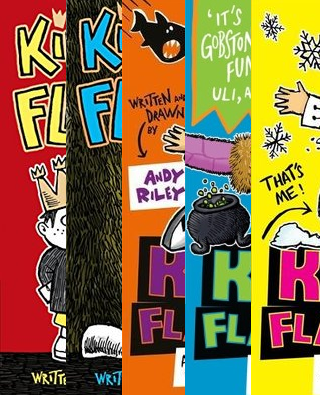 Meet King Edwin or King Flashypants, a very sweet 9-year old boy who is trying to rule his country while also going on quests, helping his friends, inventing things, collecting burps, eating food, having a jolly good time, and more.

After reading the 5th book in this series and having written 5 short reviews per book I decided to add them to my blog!

I wrote the first three books’ reviews in Dutch (as I read them in Dutch then, these days my libraries also have the English books), so I am translating from Dutch to English. There are things in there that only go for the Dutch books. But I did think it would be a bit silly to have 3 in Dutch and 2 in English.

King Flashypants and the Evil Emperor:

This was a super fun book; I am delighted I had the chance to borrow it from the library. The only thing I didn’t like, and one of the biggest reasons why I don’t often read English > Dutch translated books, is the translation. There were a few things that just didn’t sound right in Dutch, translated names that just seem silly.
But other than that I was just rolling around laughing, King Edwin (in my Dutch review I called him that as well as I much prefer his English name) is a good king, a brave one even, though he has much much to learn about how to handle money, I just felt sorry for Jill at points.
The bad emperor was indeed very bad, but I also thought he was a bit of a dork.
The book is also filled with tons of fun and hilarious illustrations that made the book even better and fun to read.

Another delightful book. Lots of fourth wall breaking, a quest to find a monster (the VELLEK, as it is called in Dutch), a very bad emperor again (though he was just mind numbingly annoying and should just leave. Soon. Fast.), and more.
Because of the emperor I gave the book a star less. I don’t mind Edwin’s POV on the emperor, but I don’t want any parts with the guy himself. What a turd. He deserved what happened to him and I was laughing aloud when it happened.
The quest was terribly fun, and I had a big laugh when Megan kept writing new and random couplets in her song during the quest. The things she came up with in just a heartbeat. Great job Nanda!
I will also stick to what I said in my previous review, do we have to change the names? We live in a time and age in which people give children names as Chukwudadibie or Fyra, so why do English names have to be translated? Can’t they just stay?

King Flashypants and the Toys of Terror:

King Edwin is back and so is his enemy (the annoying and frustrating emperor) from the other country. He has a bunch of “evil” plans which are simple to poke through and see what is going on, but which take ages before anyone notices them, or rather, it must go terribly wrong before anyone notices them. 😛 Though I have to give credit, one of his plans was actually pretty decent.
I wasn’t sure about the drama between the Jester and Edwin, it was just eye rolling and dumb in my opinion.
I did like Edwin, and I also loved his present for the Jester. It is homemade with tons and tons of love.
The ending was very sweet. Yep, if you do good you plant a tiny little seed, which can grow much bigger to more love and kindness you feed it. I do hope the emperor gets kinder and friendlier, because he sucks at being evil.
Once again, wonderful illustrations that fit the story perfectly.

King Flashypants and the Boo-Hoo Witches:

The newest King Flashypants, and this one my library had it in English! Yay! Don’t get me wrong the Dutch translation is pretty good, but I miss that the names are translated.
This time we find out about Jill’s past (witches oh my), Edwin and Jill will get closer (though then again, I did think that Jill knew that Edwin cares about her but come on he is a 9-year-old boy…. and you know how he is), there are tons of travels across various fun islands which I loved as it showed that there is still tons to be explored, we meet angry witches and terrible mermaids, and there is tons of humour.
I laughed tons, and I can’t wait for the next book. Fun illustrations once again!

King Flashypants and the Snowball of Doom:

What a surprise when I spotted this book in the library just a short time after I found the 4th book! I am so glad that they are working harder on adding English books to their collections.

This time a summer that turns very very cold, and I was delighted that Edwin invited everyone inside the castle to get warm at the fireplace (including some other people), we also finally learn (in a chapter zero just after chapter three) how Edwin got to be king and later on we learn even more truth about it which was very interesting, there is a big pyjama party, and finally Edwin climbs the mountain, though for other reasons than I thought he would.. sighs I wasn’t a fan of the emperor coming back, so two stars less almost three given he had such a big part, and I also wasn’t a fan of Wendy. Bleh. She kept popping up in the story and it just ruined things for me.

The ending was nice though, well before the whole emperor chapter again, I don’t count that as an ending.

Bonus points to the hilarious name of the tallest mountain: Hetherang-Dundister-Underploshy-Smeltus.

Here is to hoping for more King Flashypants books, though I hope next time we will only have Edwin again. Otherwise I won’t continue this series.