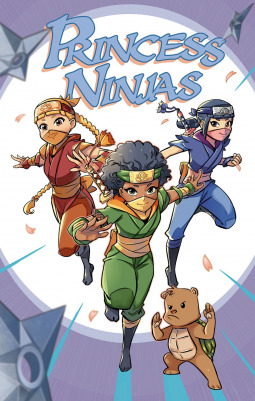 Ninja princesses? Evil that lurks and wants to take over all the magic and power? A pretty nice cover? Yes, yes please.

Sadly, in the end I didn’t have as much fun as I hoped I would have because there were just so many stupidity moments that had me rolling my eyes.

I loved how it all started with how the princesses got together and how that King and Queen got to take care of them. It was all very exciting and I was eager to read on.

I loved that each girl had something they specifically liked. Megan was more for the pranks and running around, Elyce loved books, Megan loved dressing up.

A recap which felt unnecessary to me, but I guess it was needed to let the girls know about their heritage and ninja powers.

How did no one notice that about Dorman. I would think that he is quite suspicious at times or that he slips up, but no one noticed.. Wow.

Why did the girls just run after a freaking unicorn? I get that it is OMG a unicorn, but you guys know that there is evil lurking, just yesterday you tried and failed to defeat it… and now you are just wandering of to dark forests to find that unicorn. rolls eyes

Plus that they would just believe someone they encounter. Oh yes, he is an elf, oh he can’t lie. Well then it should be OK, right? No, you couple of nitwits. No. These girls are way too trusting, which just seems odd given what happened the other day. It is like they don’t even get that evil is truly around and trying to destroy them.

What is up with their facemasks btw? You can see right through them, like it is just a bit of gauze, but that doesn’t seem logical. It looked real silly now and maybe it would have been better if there was no mouth mask at all, or even better make it without the visibility aspect.

The turtlebear? Who was called Sensei and Master depending on which page you looked that gave him his time to shine? I wasn’t a big fan. I don’t tend to like mascot characters who are just there but don’t do much special, though I am already happy that he cannot speak, dear Lord he would have been even worse.

And then there was the fact that these girls instantly knew how things worked. They haven’t had any training, the most they heard is what their skill is going to be, but that is all.

I did like the trickery that the girl did to the elves (or whatever they were). That was very smart of her to think of this. Asterix & Obelix magical stew/potion for the win. 😛

Plus, what bothered me as well was how everything was episodic. Which works at times, and works best on TV, but doesn’t work too well in this one. As I already said, one moment the girls are in epic battle and the wizard is alive and well, the next they are running after unicorns without a care in the world, and the next we see them together with that goblin princess yet no mention on how they met or how they got so close, and then boom things get messy… whut?

The constant bickering between the girls. Well, especially between Bridget and Megan. Dear Lord, these two are constantly bitching about anything and everything. And then when in one story Bridget get kidnapped Megan makes this remark: “You know what, she deserves this. Serve her right for what she did.” What the hell? This is your sister… that is not how you treat each other. I was sad for Elyce who was constantly in the middle of everything and had to be a mediator constantly.

rolls eyes again “But Gabby, he’s evil, why would you do this?” Um, because she is evil too? Was even made by Bogymn from mud, grossness and evil and a dab of magic (no power puff girls here, no sugar spice and everything nice). But I guess they had to add that, though I wonder if she is truly x or if she is just pretending.

I guess there will be more Princess Ninja books in the future given the ending to this book + the fact that the evil is still not defeated. Will I be reading them? Not sure. Probably not.

The art was pretty decent, not always a favourite of mine though, but for most I did like the style.

All in all, this one was promising but I just didn’t have too much reading it due to various reasons.