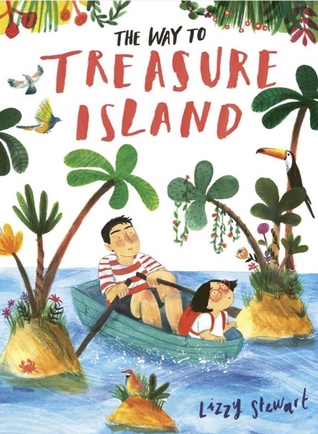 I was just mesmerised by this lovely colourful cover. Plus I do love treasure so of course I had to request this book and read it.

Meet Matilda and her dad. They are polar opposites. Matilda is more serious and follows maps perfectly, her dad gets distracted easily and would rather take a longer route if that means more interesting things. We see the two of them go on adventure when a map is found. During that journey both of them will find out that despite being polar opposites they need each other to make things work. Plus, with her dad noticing all the things (a skill I also have) the journey came way more adventurous and interesting.

I wasn’t a fan of Matilda during a big part of the book. I do love serious characters, but she took things a bit TOO serious. A treasure hunt is meant to be enjoyed. Not something you need to do as if it is a lesson from school. It is a good thing her dad was there otherwise she would have had a terribly boring trip (and I wouldn’t have read the book).

I do hope that both of them learn to appreciate each others skills + that they will cooperate better next time there is a treasure hunt. At the ending we already saw a glimpse of it, so I have high hopes for their next adventures.

The art was pretty nice. I do like how the characters were drawn, and it was also great fun seeing those big spreads (though they don’t entirely work on a pc on which I can only see one half of the page each time.

All in all, a fun book about two different characters, a treasure hunt, and appreciating each other’s personalities.