A very happy welcome to the Blog Tour for If It Makes You Happy by Claire Kann! I am so excited I am part of this tour + I am even further excited that I can share my 4-starred review with you all. Yes, I had the chance to read this super fun book, eep!

But there is more! I also got information on the book/author, and you can participate in a giveaway (sorry US/CAN only).

Are you ready? Let’s get started!

It is time for summer, and that means that Winnie is all eager to visit Misty Haven where her grandma lives and has a diner called Goldeen (yes, the Pokemon). But her summer is going to be way different than she has planned. With romance, a competition, a kingly/queenly kind of event, trouble, and people trying to get her to lose weight (though she is just happy with who she is, bless her).

The diner was so much fun, there was a dash of fun chaos with the oven constantly going in def-con mode and a grandma who didn’t want to fix it for some reason. We read about food, about karaoke cleaning nights, we see Winnie make deliveries and handle tough customers (the customer is definitely not always right that is how you get these type of people in your restaurant), we read about how the diner looks which I could easily see in my mind and I wished I could visit.

Winnie was such a fun character. She is driven, she has a goal in life, she knows what she wants. It was great to see her have all these plans, all these ideas of what she wants for the future. I would love to visit her diner when she sets it all up.

I am glad that she didn’t mind that she was larger than most people. It is just a shame that others didn’t think so, but I was delighted that she wasn’t just going to let people run over her with their thoughts. Yes, maybe the whole doctor scene was a bit overkill, but I can imagine that she got so pissed. If I came for a darned blood-test and someone would go on and on about my weight and how I would die, I would also flip a table. 😛 Then there was the thing with Sam. While at first I did kind of agree with Sam, not too much, but a little bit. Exercise is never bad in my book (if you can exercise that is), but then she took it too far. It was still sweet of Winnie to go through it because she wanted to do something with Sam (though in the end Winston just tagged along the whole time :P).

I do feel sad that Winnie had such a low self-esteem despite being pretty much OK with having more weight. I was shipping her from the start with Dallas but she is just so awkward and weird with him. She keeps thinking that he doesn’t want her romantically because she is fat and pretty boys don’t go for fat girls. Girl, please. There is a person out there for everyone, and I immediately could see that Dallas was just fine with how Winnie looked. That he was more than happy to spend time with her. So yeah, the parts with Dallas were a bit cringy, but thankfully she did seem to understand that Dallas wasn’t going anywhere, though it took her a while to see that. I would have definitely liked some more sweet moments with Dallas (though there were still quite a few as Dallas isn’t one to give up, and he was so so sweet towards Winnie. Helping her out when things didn’t go well, listening, making sure to do the right thing).

The competition, it was a shame that it happened near the end, I had expected it to get a bit more of it, but it was still terribly fun to read about it, see who is going to the finals, and see who is getting picked. I am so happy that Winnie pushed through and that she did that for someone in her life. Thanks to her that person has a wonderful opportunity and a great future ahead of them.

While I am still very much wondering what is going on between Kara and Winnie. Is it romance? Is it friendship? Is it both? I did like seeing the two together, though I wish we had seen more of Kara before the summer. Now we quickly see her be jealous of Dallas, be angry at Dallas and it defined how I saw Kara throughout most of the book. There are some hints of a Kara that I did love and that I could see why Winnie is so smitten by her. Like how sweet she was to make a whole freezer full of gluten-free food for Winnie (yes, really). Or that she was there to listen when Winnie needed someone. Or how dedicated she was in the whole king/queen thing.

Normally I am not a fan of a love triangle, but in this one it fit. I was both shipping Winnie with Kara, but also Winnie with Dallas. It felt all natural for these three to be together in a way. I guess you could call it polyamory, and I was delighted with how things were written. I loved how Winnie was quite clear on her intentions and also kept telling Kara or Dallas that she loves them both, that she would like them to get along, that she wants both of them in her life. And this may sound like she can’t choose, but that is not how it felt to me. It felt right, and I was just awwing.

There was at times a bit too much thoughts going on and not so much actually happening, which I wasn’t a too big of a fan of. I am not one to enjoy thought-driven stories. Give me plot! Give me a story! Let something happen that isn’t in someone’s head.

The grandma? Oh boy. Don’t get me started on that witch. She was just the worst. Making snide comments about her grandchild’s weight, pushing her to diet and do exercise. Restricting her from several things for no apparent good reason. One could say she has a strong personality, I would just call her a bitch. I do wonder if she has always been like this, given what Winnie’s parents say yes, but given that the previous years all went OK, I wonder what changed. Despite that Winnie is 18 years old, an adult, she treated Winnie like a child. She even called her child. And sure, hey, the lady is like 70/80 years old and 18 is nothing to her, but a bit more respect would have been nice.

The ending was really nicely done, yes it was sad that it had to end like this, but I guess we could have seen it coming from early on. It was wonderful to end it with all of them in the car, talking over, saying I love you’s. Aww!

All in all, I had a wonderful time reading this book. Yes, sometimes I was shaking my head at it all, but mostly I was rooting for the characters, hoping for the romance to get somewhere and cheering when romantic things happened, I loved how positive it was, shipping the characters, and laughed during the sillier moments. I would recommend it. 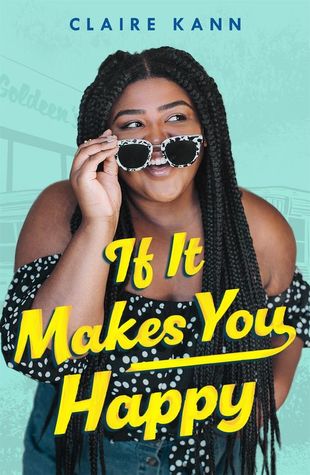 High school finally behind her, Winnie is all set to attend college in the fall. But first she’s spending her summer days working at her granny’s diner and begins spending her midnights with Dallas—the boy she loves to hate and hates that she likes. Winnie lives in Misty Haven, a small town where secrets are impossible to keep—like when Winnie allegedly snaps on Dr. Skinner, which results in everyone feeling compelled to give her weight loss advice for her own good. Because they care that’s she’s “too fat.”

Winnie dreams of someday inheriting the diner—but it’ll go away if they can’t make money, and fast. Winnie has a solution—win a televised cooking competition and make bank. But Granny doesn’t want her to enter—so Winnie has to find a way around her formidable grandmother. Can she come out on top?

Claire Kann is the author of LET’S TALK ABOUT LOVE and an award-winning online storyteller. In her other life, she works for a nonprofit that you may have heard of where she daydreams like she’s paid to do it. Find out more by visiting her website: www.clairekann.com (and while you’re there, tell her about your cats. She loves cats. A lot.)