Welcome to the Cover Reveal to not just one book, or two books, no four of them! It is a Cover Reveal series edition bonanza! Today I am delighted to reveal the covers to The Grimoire Chronicles by Zelda Knight, and I am sure you all will love these covers. Four kick-ass looking girls is always good in my books.

Next to revealing the covers I also got information on each book + the author. And, yes there is more, I also got an exclusive excerpt and a giveaway (open international). Whoo, what a Cover Reveal~

Are you ready to see all this awesomeness? Then let’s go~ 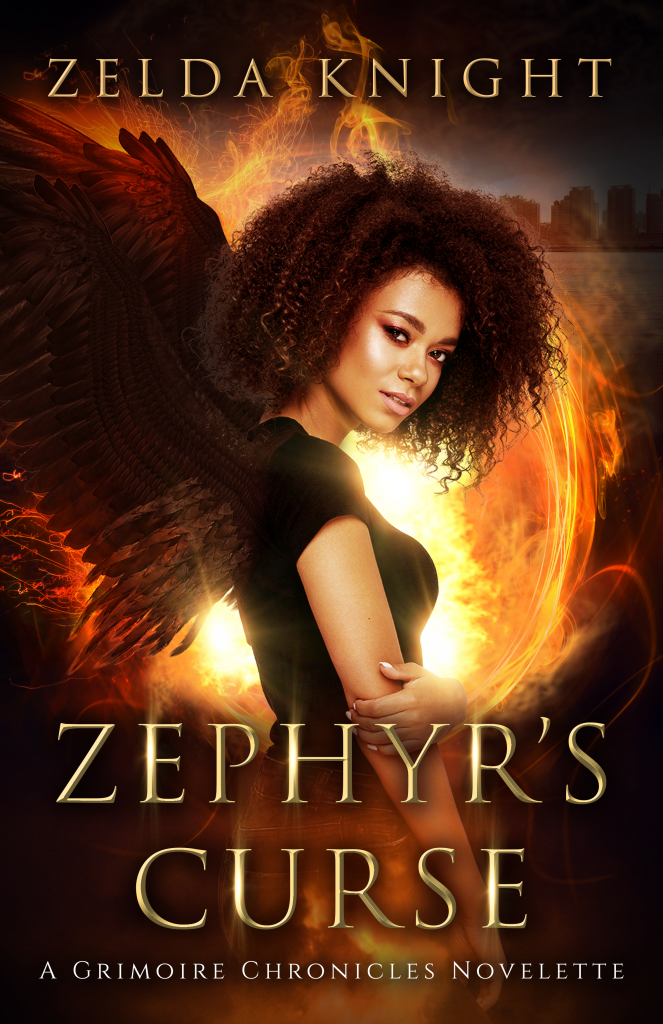 When Zephyr enters an ancient tomb in search of scrap metal, she doesn’t anticipate igniting a cosmic war. She’s stolen the key to a rare grimoire, The Book of Alabaza the Brave. The hordes of demons chasing her want it back. If she’s to survive, she must rely on Ezekiel, a member of a supernatural clan of guardians called the Thrones. The only problem is she belongs to the demonic caste, and Ezekiel was sent to slay her. 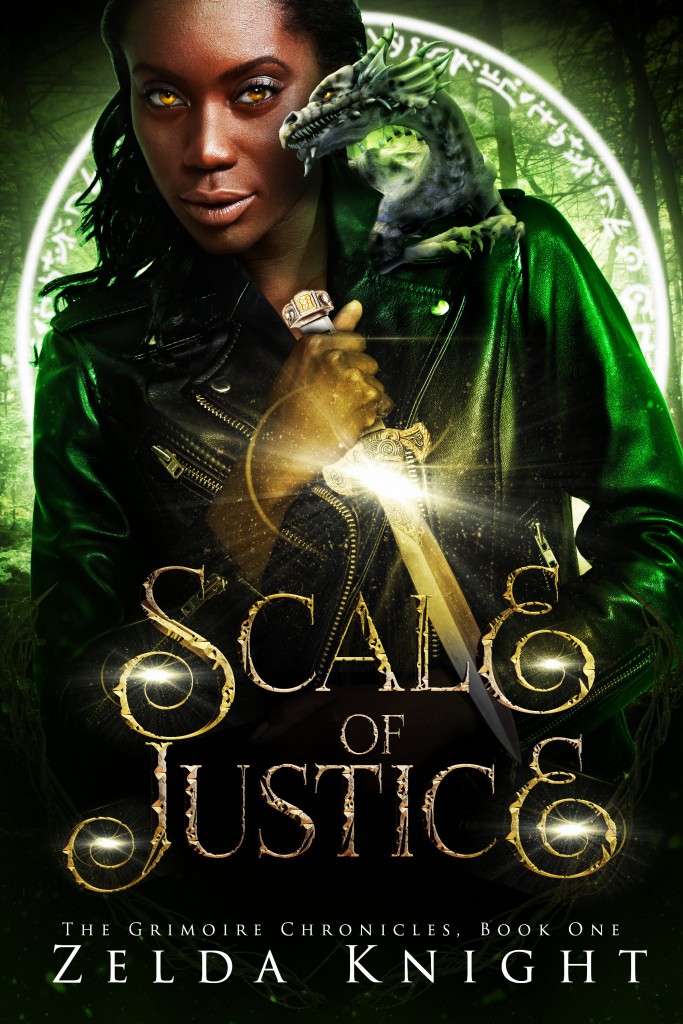 Justice Bell has spent her entire life running away from the past. The direct descendant of the most powerful warlock in human history, she’s struggled under the weight of her family’s expectations. The only person she can trust is D’Angelo, an elemental sorcerer who happens to be her ex-boyfriend.

To make enough money to skip town, Justice and D’Angelo track down a demon with a large bounty on her head. While in pursuit, Justice stumbles about a rare girmoire, The Book of Alabaza the Brave. Soon, she discovers that the shapeshifting Nightshade, immortal Fae, and all of humanity are on the verge of war. Justice must form a coven with her estranged sister, Solana, and her best friend, Vanessa, to restore order to the three realms.

Scale of Justice (The Grimoire Chronicles, #1) is a fast-paced urban fantasy romance novel starring a rebellious witch and her charming elemental sorcerer. 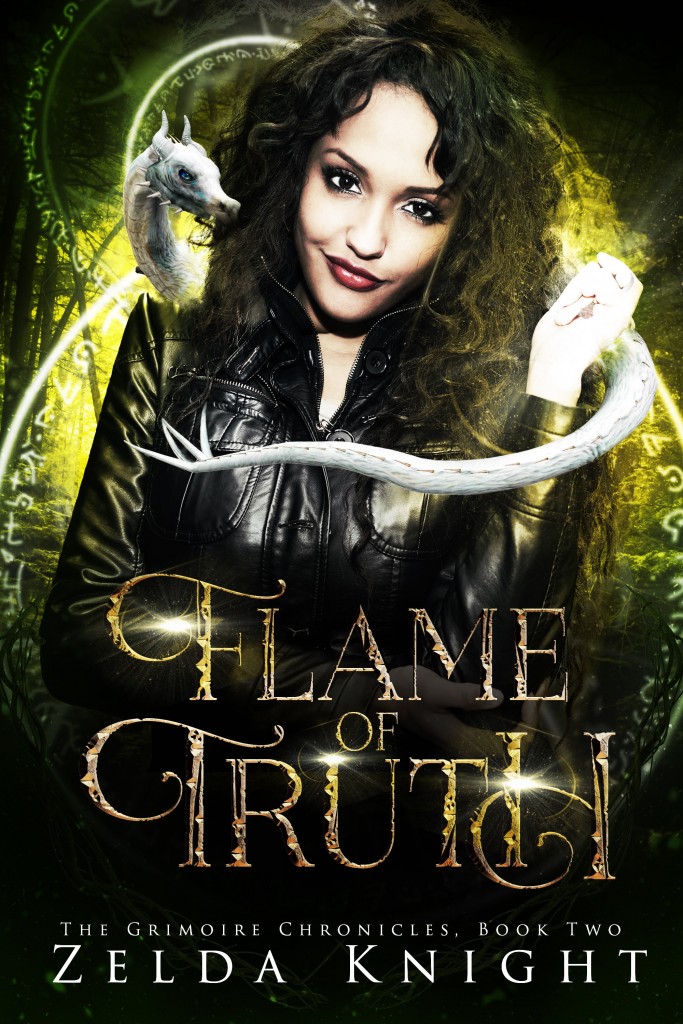 Solana Bell grew up longing for the future. The unwanted secret child of the Bell Clan, a powerful coven of witches and warlocks, Solana has always felt out of place. When her half-sister, Justice, begs Solana to join a new coven alongside her rival, Vanessa, Solana is more than a little weary.

Soon, Solana, Justice, and Vanessa are in the middle of a cosmic power struggle between the shapeshifting Nightshade, immortal Fae, and all of humanity. Transported to the realm of the Nighshade during the war, Solana encounters Prince Rafael of the dragon-shifters. Solana holds the key to a rare girmoire, The Book of Alabaza the Brave. Prince Rafael will stop at nothing to possess it, even if it means following her to the underworld.

Flame of Truth (The Grimoire Chronicles, #2) is a fast-paced urban fantasy romance novel starring a trickster witch and her chiseled dragon-shifter prince. 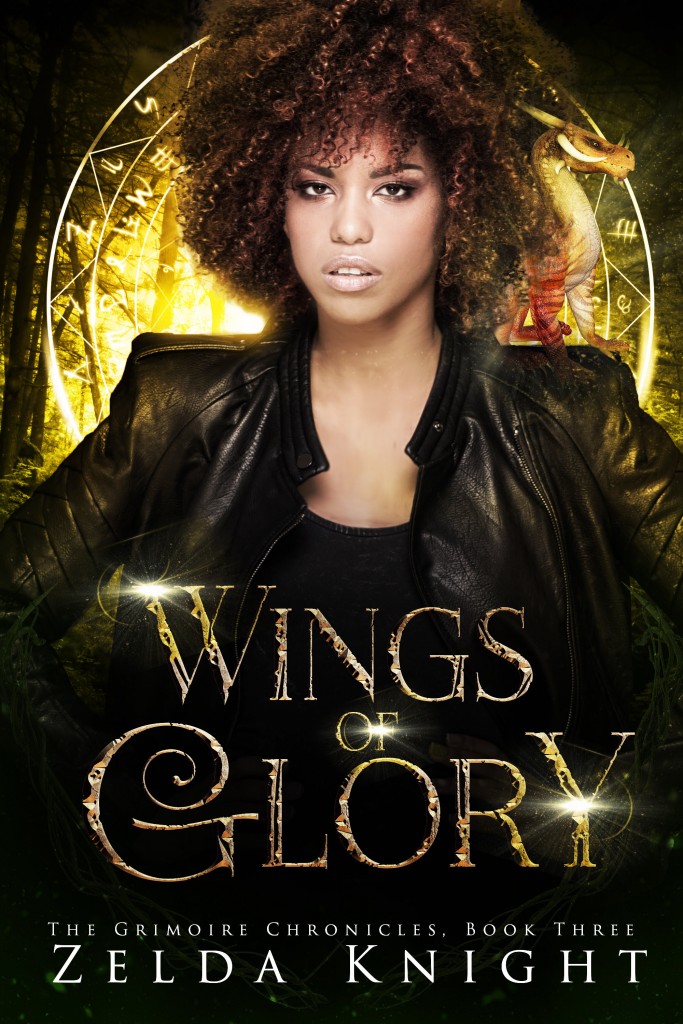 Vanessa Jean-Charles has always lived in the moment. Orphaned at a young age, she’s navigated the world and her budding magical abilities alone. That’s until she met the Bell sisters, Justice and Solana, forming a coven to save the world.

The discovery of a rare girmoire, The Book of Alabaza the Brave, ignited a cosmic war between the shapeshifting Nightshade, immortal Fae, and all of humanity. Now Vanessa is tasked with destroying it. After sneaking into the realm of the Fae, Vanessa searches for their king, Emmanuel. Well, that was the plan before he tracks her down and demands her hand in marriage.

Wings of Glory (The Grimoire Chronicles, #3) is a fast-paced urban fantasy romance novel starring a badass witch and her immortal fae warrior.

Buy the book here: Aurelia Leo
About the author: 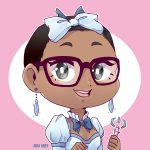 Ezekiel motioned towards a gateway adorned with the skulls of giants. A shiver ran down Zephyr’s spine. She curled her wings around herself for protection. Looking at the bones feels like a hex, she thought absently.

Embedded in the eye sockets of two of the three skulls were runes. She walked up to the gateway, doing her best not to gag at the stench of decay. Squatting to inspect the ground, Zephyr reasoned one of the runes was missing. There were only three realms, after all, Nightshade, Fae, and Human. The magic radiating from the runes matched that of the gateway. Zephyr glanced at the hilt of the ascended’s broadsword. On the hilt, a gem reflected what little light there was inside of the cave.

There’s no doubt it’s the rune he seeks. That’s the only way he could’ve pierced The Veil. So why is he asking me if I stole it? It doesn’t make any sense!

Lost in her thoughts, Zephyr didn’t notice Ezekiel approaching until it was too late.

“So?” Ezekiel boomed impatiently, mere inches away. She squawked in terror and leaped to her feet. Spinning around, Zephyr gulped as the guardian sheathed his sword and stepped forward in one fluid motion. Before she could step back, he lifted her chin upward, the palm of his hand resting on her throat. It’s calloused… I always expected the highborn to be smooth all over.

“Borrowed a key!” She snapped. Zephyr realized her mistake when a smug grin crept across Ezekiel’s handsome face.

“Hmp. For a demon, you are a fool.” His gleaming rows of perfectly straight teeth were begging to be knocked out. Zephyr believed he was her guardian angel. Now, she knew he was worse than an ogre!

Ezekiel bent forward, and his breath ghosted against Zephyr’s skin. Something ethereal and sweet replaced the familiar smell of decay. With a curious expression, Ezekiel cupped her wounded cheek, thumb resting on her chapped lips. He murmured something too low to hear, but it sounded like an incantation to Zephyr’s untrained ears. She shut her eyes tight with a grimace. She didn’t want to see whatever he was summoning to obliterate her. To Zephyr’s astonishment, her cuts and bruises began evaporating, leaving behind a faint translucent aura.

“You…healed me?” She asked dumbfounded.

He shrugged, “Naturally. I am ascended, not your neighborhood troll. Besides, you possess the key. Where is the grimoire of Alabaza the Brave?”