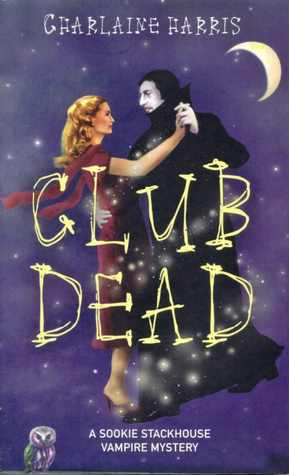 “The air was cold and wet, and if you stood still for a moment the chilling damp would creep into your bones. I could tell the temperature was taking a deep dive, and the bright sky of the morning was a fond memory. It was an appropriate day to dump a body.”

The third book and I have to be honest… I enjoyed myself, but way less than the previous books.

That mostly had to do with the love quartet. I guess the other book also had a love quartet, but I don’t count Sam as a potential threat/potential lover and he stays away for most. 😛 But in this one the romance was just messed up as hell. We have Sookie who is pissed at Bill who did things one shouldn’t do in a relationship but he still likes her, then we have Eric who loves (or at least likes toying around) with Sookie, and lastly we have a new guy, Alcide. Sookie sure is popular and sadly she has some terrible morals at times. I understand that she is pissed with Bill, but in a way they never broke up, and so she is still in a relationship with Bill. Even if he is missing and clearly did things one should never do in a relationship. So I was definitely not happy with her flirting like hell with Alcide, even saying things about the future and having some strong feelings towards each other. It doesn’t help that Eric is also around and also flirting like hell with Sookie (and even doing something that just was a BIG FAT NOOOOOOPE). SO yeah, very disappointed in the romance, very disappointed with Sookie.

Yep, Bill is missing in this book. It is up to Sookie to figure out what is going on + help out Eric with some things that need her telepathic powers. She is not too enthusiastic about it, as is logical given what we learn about Bill. Not to mention the things that happened in the last book + some bad decisions by Bill which relate to the previous book’s ending. I did think it was pretty interesting as it gave us a brand-new character, Alicide. Who I loved from the start and I do love the interactions between him and Sookie even if it went romantic (why can’t we just have some people be friends?). I am also happy to see her travel again and see some other parts of America, meet some more vampires and see other supernatural beings.

Of course, Sookie gets into heaps of trouble and quite often questions why she is still around the vampires given that they always bring her into trouble. I can understand her though, come on in just the course of 3 books she has been to the hospital so many times she is practically a regular… Not something you may want in your life.

Bubba also takes a big role in this one, or at least in my eyes and based on all the events in this book. I had a big laugh at the vampires from the big mansion and how they reacted to Bubba. Even wanted to keep him!

Bill’s work/what he is working on? I wonder why he thought that was such a good idea. I could just throw in a few reasons why it is a terrible terrible idea and why I have a feelings things will go to hell thanks to that thing. Of course, I can also see why someone would make this and the benefits that come with it. But come on, in the wrong hands? This could spell disaster.

What happened to Bill and how things got solved? Pretty excited, and I have to say I was cheering for Sookie. Go go girl!

The ending was very sad, but I saw it coming from the start of the book. This was just bound to happen, though it still makes me sad that it has to come to this. That there is just nothing to fix, at least for now.

All in all, still a fun book in the series, but I am a bit worried about the next book as it is going to be very Eric-centred and I am not that much of a fan of him. But I will keep on reading. Going to give it a chance at last. Maybe it will turn out to be awesome. Maybe we will see a different side to Eric.

Oh, and I still think that the cover is hilarious (just like the previous ones). Especially the way Bill (I am guessing it is supposed to be him????) and Sookie are dancing in the air.