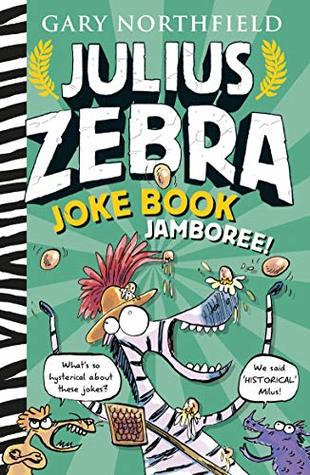 Julius Zebra is back as he travels through all the countries he visited to bring us puns, jokes, and facts (real or not).

I was very excited about this, I am a big fan of the Julius Zebra books and I keep hoping for more. So of course I had to add this book to my collection.

I have to say I had expected more jokes. Many more jokes. There were still quite a few, but I had expected that this one would be totally full of jokes. Instead it is much more than just that. There are puns, fake and real facts, we see our stone-collecting-craycray animal tell us about stones (and see him break down walls to get some stones).

I loved that they kept the order of the books, we begin in Rome and end up in Greece. We see our characters walk to these countries (their poor little hoovies and feet). And then we get told about crazy facts, puns and jokes from that country.

There are also some stand-up moments in which animals/gods tell us jokes/not-so-jokes. Each country has one. I was definitely looking forward to these as I was curious to see what would come to the stage.

I loved seeing our animals again and see that they are still 100% the same as they are in the books. Milus/Miles our lion is still a grumpy wart while Julius is still oblivious to most things. 😛

Of course there is plenty fun art that made the book just bounce and make the experience tons more fun!

All in all, despite that I had expected a joke book and less of a tour through the countries with some facts (or not) I still enjoyed this fun and hilarious book. I would recommend it to all wanting more of Julius Zebra. Be sure to have read the other books though. This one clearly comes after all the things that happened in the series (so far).