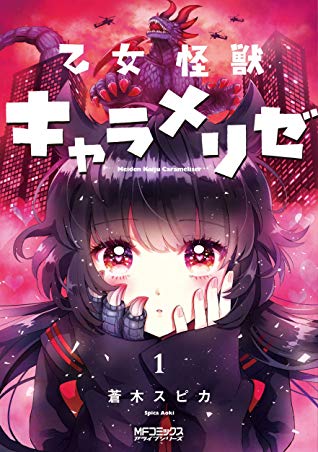 Meet Kuroe, a sweet albeit gloomy girl… but she has a big secret… she is a Kaiju.

I was lured in by the absolutely stunning cover, just look at how beautiful it is! The title had me pondering, Girl Kaiju? You mean this girl can turn into kaiju? OMG, I want to know more.

Our main lead is a girl named Kuroe, a girl who has had trouble with her body parts throughout her life. She grows tails, her hands mutate to that of a monster, she has spikes poke out of her back among other things. So she hasn’t had it easy and tries to avoid people (which I could so understand, I would have done the same if my body just randomly transformed or gained parts). I do feel sorry that people were so harsh towards her, calling her Psycho-tan/chan and treating her like she is a disease. Bah. Stupid girls.

But Kuroe’s life will go totally topsy-turvy when she falls hard for the most popular boy in her class. At first she has no interest in him, or well, that is how it seems, but eventually he shows her a sweet and kind side and she falls for him. However, this comes with consequences. Kuroe’s transformations take place even more often, and her tail even grows so far it isn’t concealable any more. But that is not the worst… she turns into a kaiju! Yep, this girl she turns into a giant godzilla like creature. Her mom explains that she experienced sexual attraction/arousal and thus her body totally overloaded and went to full transformation mode. This poor girl, she finally has a cute guy notice her and as soon as things get a bit heated (even hand holding will do it) she POOFs into a monster. I wonder how long it will take Minami to notice, he did see that the monster is making eye contact with him, not to mention that Kuroe keeps disappearing. I am curious to see how he will handle the truth when he finds out, or if Kuroe tells him (which she was planning on doing).

I loved the girl we met, and who was thought to be dating Minami, she is just so sweet. The fact she loves kaiju to the point of over the top obsession is hilarious though. That she would even go lie around the last scene of its appearance and hope it tramples on her was funny, but also had me shaking my head a tiny bit. How did her obsession turn this far?
I loved how she was trying to get Minami and Kuroe together, even to the point of bluntly asking Minami if he had a girlfriend.

I still have many questions. Is Kuroe’s mom really her mom? Why does Kuroe turn into a kaiju? Who did the mom have sex with to create a girl that is half human and half kaiju and can even turn into a full kaiju? is this condition in any way curable? Or will Kuroe have to live with this forever? Man, that sounds pretty sad, that she may never have anything like kisses or sex because can you imagine her turning into a kaiju in the heat of the moment? OK, it also sounds hilarious. Sorry!

The art in the manga itself is pretty beautiful at quite a few pages. I especially love it when we get a close-up of Kuroe’s face. But also the kaiju is drawn really well, it is very nice that it still looks, in a way at least, like Kuroe.

All in all, I definitely need more of this interesting and funny manga. As I said, plenty of questions, plenty of things that still can be explored. I want to see Kuroe and Minami get closer, hoping that one day they can be together without the kaiju spoiling the party.