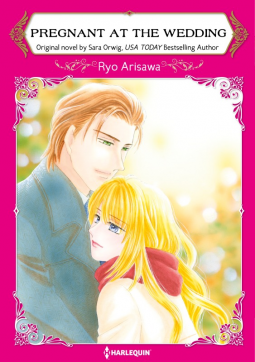 So my next Harlequin manga read, and I am a bit doubtful about it. While I do love the cover, and I do love the marriage proposal stuff, I am not sure how I feel about the magical pregnancy after 1 time sex and then running away from the guy. I have seen this plot just way too many times in Harlequin, and sure it ends all perfectly well I still think it is crappy of the girls to act this way.

As always writing my review as I read. 🙂 Follow me as I read this story and see my reactions to things that happen. No spoilers!

They had a sexy one night stand it seems, and I was at first confused why she was acting so eh about it when it looked so hot, it seems that he had someone else in the house the morning after. Whom I am sure is the sister or some family member and not another girl he is flirting with.

We then learn a bit about our girl and how they met up. And how Ryan is pretty much determined to not let her go. Which is kind of sweet, but also kind of creepy. 😛

I did think it was a tad weird she just let him in the apartment. I also thought him pushing her to go to the doctor and then worrying so much was a bit weird. Sure, she is pregnant and has morning sickness, but I have had a few mornings I just didn’t feel well, my boyfriend/now fiance soon husband, didn’t threaten to take me to a doctor.

Lol, but he did figure things out thanks to this. I did think he was a bit too pushy. I get that it is his baby too, but still also respect her opinion on the matter. But then again most guys in Harlequin Manga seem to have forgotten how that works. He is clearly way too eager in this and she is clearly showing she doesn’t want things. Respect that. Then again, I guess if he respects her borders we wouldn’t have a story nor do we have a magical happy ending. Sorry, I just don’t feel it this time.

snorts No, having great sex once + having a couple of good dates doesn’t equal a marriage. That is just nice to have but you need more than that. Love. Friendship. That you care about each other. Support each other. But really most importantly, love. Oh and now he is bribing her. Oh hey, if you marry me I will pay off the debts. rolls eyes He is like a little kid who wants his favourite toy and will do anything to get it. No, just no. I was just disgusted with her answer. No. Just no.

I probably should write some more, but I just can’t. I am halfway through the book and just looking forward to the ending now.

“For the first time, I felt happy and glad that I decided to marry him.” Whut? Why? He forced you to marry you, he is silently threatening about your kid and that he wants it in his life or else, and more.

I am sorry but everything felt just a bit too creepy. I just don’t see any sparks or connections between them. Just a guy who is overpowering a girl who has almost zero push back power.

Ah the dramarama starts. sighs and rolls her eyes I thought it couldn’t get any worse, but it did. These two….

Sorry yay for the happy ending, but it just feels way too forced and I still never saw the spark. I wonder if she truly loves him, or if she just doesn’t dare to say no. 😐

The art was pretty OK, well with the exception of the dead fish eyes they have in almost all the scenes.

But yeah, this was just a very big disappointment. A lacklustre female lead and a way too overpowering dude who demands to get what he wants no matter what.