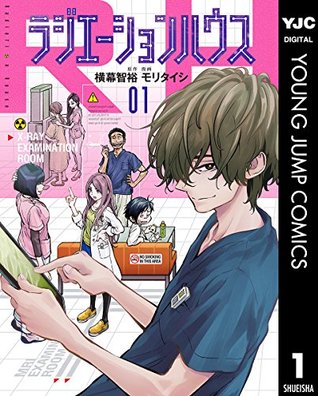 A delightful, though a bit dry at times, manga about the radiology department at a hospital. We mostly follow Igarashi or An, but at times we also see the other characters. We have a yuri girl, a ditzy girl, a pervert dude, and some other people.

It was all pretty interesting, though I did think it was a bit silly how Igarashi was the magical saviour of all. A bit like that hospital series called House (what a coincidence that this one is called Radiation House, mmm). House always knew what to do and such and generally was the one who magically had the solution. Even sillier was the fact that Igarashi had all that power, all that knowledge and he just throws it away for a girl who doesn’t even know him. 😐 But I still liked that he was able to really dig into the scans and also helped out people even though he only just met them and only just heard their stories. It was quite magical to see him work, he totally went into his work and there were some pretty interesting scenes.

I just don’t like the love interest, the radiology doctor girl. She was just so annoying and frustrating, kept treating people like shit because they are lower than her in the medical jobs, she treated Igarashi as a pile of poop nd said things that no one on a work place should say. Plus for someone who is such a hotshot she fails so many times and needs to be saved by our saviour Igarashi, which was frankly ridiculous. Yes, I don’t like the girl, but I am not happy to see her be undermined. Especially when everyone is speaking so highly of her, you would think she knows how to do her job. And I can imagine one mistake? But two? And very big ones even?

Plus, I found it highly ridiculous how everyone reacted to Igarashi at the mammo. He was just checking up on the woman. Yes, it is a bit awkward to suddenly have a guy instead of a girl to take the scan, but he just wanted to help out. He just wanted to check on some stuff that is also needed in case one wonders if they have a boob problem. No need to accuse him of sexual assault and such. And that woman even was an editor for a women’s magazine. Well, I can see what kind it was. 😐 Sorry to say that, but come on, I have higher hopes of someone who is editor for a magazine like that.

I did like that we got a closer look at the lives of the patients. It really made them more human than if we just saw them at the hospital. My heart broke for the patients, especially the couple made me cry.

The art was pretty good.

All in all, I do want to at least read one more volume of this to see if it gets better. I do hope that Igarashi is able to tell An who he is, and I hope that An stops making stupid mistakes and treat others more kindly. Plus, I want to see what new patients we are going to get.