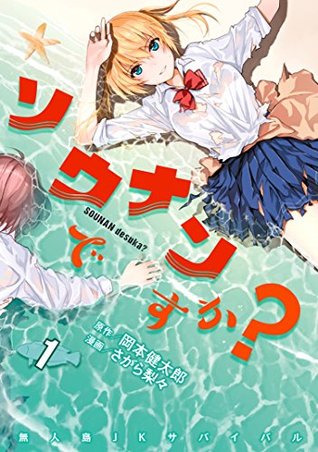 4 girls, one island, no help, will they survive?

I saw that this one was getting an anime and had to check it out. I just couldn’t wait until the anime would arrive. And oh boy, this was just too much fun to read and I will definitely be watching the anime as well.

Meet our 4 girls, Homare who is the one who knows the most about survival and is the leader of our group (first nominated by herself and then the rest settled in with the idea as she knows the most). She is really kick-ass, when we first meet her she stabs a fish out of the air and then wrings it to get fluids… Then there is Asuka, who tries her best but is kind of useless most of the time. She gives up very easily and I was just rolling my eyes at her constant complaining. Yes, we get it, you are stranded, it isn’t fun, but do you want to survive? Then work. We have Mutsu who is a bit timid but more than willing to try things out and learn from Homare. She is quite cute and also has plenty of knowledge that at times comes in handy. Lastly, Shion. I wasn’t a fan of this girl. She is the rich girl and barely does anything to help out. Yes, she tries to make fire, SOS signs, but that is it. I hope she will learn to be more of a team player.

The chapters are pretty short and chronicle how the girls are surviving. We start with our trio finding Homare and then drifting to an island (with a chase scene). Then comes finding water, then food to finding a shelter to how to hunt (yep, the girls are planning to hunt as they have found out there are some tasty rabbits and squirrels around). I can imagine that the girls, well with the exception of Homare who just eats anything and everything, are hesitant to eat innards or bugs. But I am glad that they at least tried it, though I had quite a laugh at their faces. Then again, those would be my faces as well if I had to eat those things.
Many of the survival things are very nicely explained (though one comes with a warning to not do this thing unless in an emergency) and I have learned some new things about how to survive. No clue if they are all true, but they do seem pretty true given that I have done some google-fu to check. 😛

Next to the grim survival there is plenty of humour and the girls trying to get along. I do like that humour is added and that things aren’t all grim. Though now it feels as Yuru Camp x Survival x Uninhabited Island.

I do wonder why no one is looking for the girls given the plane had 100+ passengers. Or did they drift so far away from things that people are overlooking them? Then there is the other question, did anyone else survive the crash? Will we meet them?

I would recommend this one if you are looking for a fun manga about survival and cute girls.