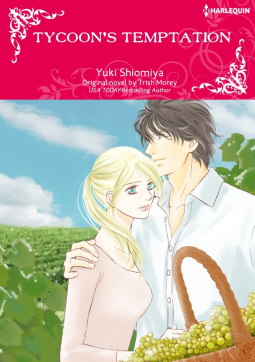 The second of the 12 Harlequin manga I got recently. I picked this one for today’s reading because it was the oldest on the list (already out). But I also adore the cover and the blurb sounds interesting. Tons of wine and charm.

So follow me as I read this manga. What will I think of it? What kind of happy ending will we be getting?

Well, that is a boring start. Lots of talk about companies and such, not really something I like to read. The guy is kind of cute though (just as the guy on the phone is cute, ah a glasses guy heart eyes). But his attitude is just the worst. Thinking he can just charm and bribe his way through this negotiation. Bro, please. Just don’t.

I am glad that our girl is not taken by his charm, I had a laugh at how “polite” she was acting. Plus, I am glad that she did listen to him and then told him no. I was a bit worried at first she may just throw him out immediately as soon as the contract was shown, but instead she listens and then explains why she doesn’t want it. And frankly, I agree with her. Rubida seems to be her crown jewel, something she treasures, and she doesn’t want it sullied. We also learn why, and I was agreeing with her even further. I can imagine that after all that she is even further hesitant to just dive into a contract with some rich guy.

So, um suddenly she has a connection with the hotel? That came out of the blue and felt a bit too much of a plot convenience/plot device. Maybe in a later part of the manga it would have been fine, but now? Right after the negotiations? No. Nope. Also the fact that he can do the job that the other guy can do, too magical. Sorry, I just didn’t like it that much. Again, maybe later in the story it would have been fine, but so soon after her saying no? Too early, too soon, too much plot devices/conveniences. Urgh, grandpa, too soon.

Also why is he driving? She is the one who knows the roads and how to get to places…

sighs Please.. “She looks much nicer with that smile on her face. She tends to frown a lot. She doesn’t seem to pay much attention to the way she looks. She always wears work clothes and has her hair tied up. But she certainly has beauty that could take your breath away.” rolls eyes You just met her like a day ago and you judge her like that?

While the kiss was sweet, it was just not the moment. She just told you about her parents, about the emotions she felt, and then you do that? Eh.
Though this brought out the reasons why she is even further hesitant about the contract. Just a shame it had to be shown this way….

And again he judges her on her outfit/how she looks. Yes, it is a party, but some girls just don’t want to go dressy. What she is wearing is superadorable, and yes a bit casual, but still fun and good for a party. Apparently he thinks that beauty only happens when you do something with it. No, Holly is gorgeous as she is.

Also grandpa, please. Stop shoving these two together, it is getting highly awkward. Sure, Holly has feelings, and it is clear that Franco also has them, but still it feels all too much forced and convenient.

OK, now I am starting to see the appeal of these two, and yes, now it feels a bit better of a time for romance. I am still not sure though, still on the fence as it still feels rushed. But I can honestly say that I am happy with some romance.

I did think it was a bit too soon, yes again, this whole story is just one rushed heck of a whirlwind. But on the other hand I am glad with her decision. While not the right time, I am glad that she saw a different side to Franco, that she was able to trust him more. He has done quite a bit for her and shown some great character.

rolls eyes Yep, I keep on rolling my eyes. That drama. A bit later than I had expected, but it is here and silly again. Can people have a grown-up conversation for once? Or is it that hard? And of course there are some magical revelations right after the drama happened. sighs People.

There is the happy ending and the grown-up talk they should have had before. The ending made me happy though. It was a pretty sweet one, and I was smiling.

All in all, while it was rushed as heck, filled with plot devices/conveniences, there were some eye-rolling moments, I still enjoyed this manga + the art was fabulous. I will be rating it a 3 stars.