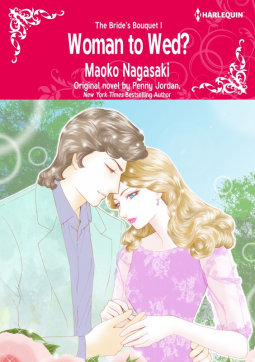 Another Harlequin manga, and a few more to go before I am through this batch. I am a bit hesitant to read them now I haven’t had much luck with the books so far. This one sounds cute though, and I love the cover (that dress is so pretty). Hopefully this one will be a fun one.

Let’s get started~ Haha, that was funny to see how all three of them reacted and then just tried to catch that bouquet and managed it. Their facial expressions were just fab.

Ah, I was already wondering how old she was given that she talked about Sally and told us she was her stepdaughter. But there is apparently only a 5 year difference, so that explains a lot. Though it seems she is a bit older given that she has other children who are old enough to leave the house. She doesn’t look that old, but I do like it that we have an older woman as the main lead this time round. Most of these Harlequin manga feature young women.

Wait, those kids bumped against someone without even saying sorry and our MC is angry at them? Um, hello? That is not how it works.

Um? Something missing in translation here? She is constantly going on about discrimination but the guy just wants to sit down on a bench and she is totally getting weird and angry about it? And why is he kissing her to calm her down? That is just a big NOPE in my book though.

Of course they meet again and boy it was just so awkward. 😛

Um, from what I remember on page 10 the sister in law mentioned that our MC has kids and that they have left, however on page 46 the guy makes a remark about her babysitting kids: “This may be blunt, but is it that you didn’t have children or that you couldn’t?” Um?
Plus he keeps making remarks on her and her husband (who is dead). Questioning if she truly loved him. Who the hell asks that?

But I do like the budding romance, yes, I am not a fan of Brad, but still I do hope that he can change and that they can get their happy ending.

Haha, them taking care of a little kitten. I had a laugh seeing the expression when the cat encountered a bath.

We find out why our MC and her husband got together, and holy wow. That is messed up in a way. Also kind of sweet, but mostly wow that is not good. Now I am kind of wondering what the sister in law meant at the beginning, because there is no way she could have had kids with this revelation.

Plus, it felt a bit weird that she had that big revelation and the next thing that happens is her having sex with Brad. Though the sex was pretty good, and I loved that we saw some nipple action as well.

I loved our Mc’s heart to heart with her step-daughter. I hope that gives her more closure on her dead husband and allow her to move on. Because I want her to open up further to Brad. Get closer to him.

Awww, at that ending, that was perfection. I am so glad that Brad came back (as expected though) and that they had this conversation. I had a laugh though at seeing Sally and her hubby looking at stepmom dearest and her new lover.
I was happy with that last page, and I hope that we will also see the other two girls who caught the bouquet but were so against marriage.

The art was pretty gorgeous, however I had a problem with the eyes. At times they were just gorgeous, but at other times they looked like someone just had popped in a marble. Creepy!

I had fun reading this one even though it felt like there were some inconsistencies with what was being said. I was rooting for these two to get together though after the initial awkwardness was over and the guy started listening instead of judging. I loved the sex scene and wished there were more. All in all, yes finally a good Harlequin manga again. cheers