A warm welcome to the Blog Tour for The Shortest Distance Between Love & Hate by Sandy Hall, I am so excited to be part of this tour and that it is stopping at my blog today. twirls

I got all sorts of things for you. Like an excerpt (did she just call him Bart? :P), learn all about the book/author, and oh yes, be sure to join the giveaway located at the bottom.

Let’s get this tour started, yay!! 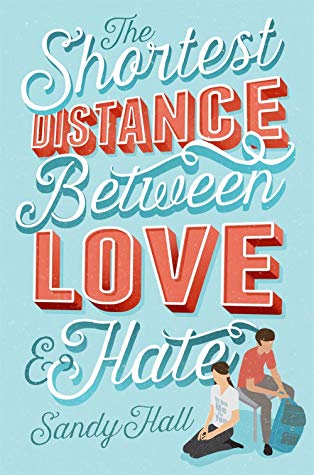 A teen girl starting at a new school is torn between long-held loyalties and a bright new love in this irresistible new YA contemporary romance from the author of A Little Something Different.

Paisley is really looking forward to college. She is ready to take charge of her destiny and embrace some new experiences! Finding a hot guy to make out with at her first ever college party seems like a great start…until her best friend informs her that mystery guy is actually Carter Schmitt, Paisley’s sworn enemy who basically ruined their lives in middle school.

So much for new people and exciting new experiences. Oh well. Paisley will just pretend he doesn’t exist. Of course that would be easier if Carter, AKA her super-hot-sworn-enemy, hadn’t ended up in threeof her classes AND the same work study. Is it too late to rethink this college thing?

Sandy Hall, author of A Little Something Different and A Prom to Remember, is heading back to college in this sweet and quirky contemporary romance.

Book Two in the Tough Love Series—an enemies to lovers, suspenseful romance, full of sexy Italians, feisty heroines, globe-trotting action, and an ending that’ll both satisfy you and leave you ready for more! 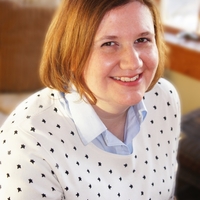 I’m a teen librarian from New Jersey where I was born and raised. I have a BA in Communication and a Master of Library and Information Science from Rutgers University. When I’m not writing, or teen librarian-ing, I enjoy reading, slot machines, marathoning TV shows, and long scrolls through Tumblr. A LITTLE SOMETHING DIFFERENT is my first novel.

I find them in the corner of the tiny backyard. It’s mostly full of garbage. College kids have no pride in a place. There’s a perfectly good bicycle in the corner with two popped tires and a rusted chain.

Paisley’s roommate is standing near that bicycle, bent at the waist with her hands on her knees, breathing heavily, her long, dark hair creating a curtain around her face.

“Stef doesn’t feel well, so I think we’re going to head back to the dorm.”

We head out to the street, leaving the depressing back- yard behind, and Stef walks a few feet in front of us, swaying a little.

“I don’t think she can really hold her alcohol,” Paisley says.

“No, you and I are obviously seasoned drinkers.” She lets out a loud belch and giggles.

“This is probably the most I’ve ever drank in one night,” I admit.

“Maybe this is why people do shots. So they don’t feel so full,” I suggest.

Stef stands at the corner waiting for the light to turn in our favor. There’s not a lot of traffic out in the wee hours of the morning on the roads surrounding our campus, but it’s good to know that even though she’s drunk, she still remembers to follow the rules of the road.

“I am Estefania Gomez! And I am here to have fun!” she yells into the street.

“Sure you are, Stef!” Paisley calls back to her.

“I’m sorry I interrupted your time with the cute boy,” Stef says over her shoulder as a lone car passes.

She gives me a sidelong glance and steps in front of me to link arms with Stef as the walk sign lights up. I stay a few paces behind them, realizing that I probably should have told Ray I was leaving the party. We don’t have each other’s numbers yet, so I can’t text him.

Hopefully he’ll realize I left and come back to the dorm on his own. Or maybe he’s staying at his brother’s tonight. I don’t know his life.

Either way, I doubt he’ll be worrying about me. I make a mental note to exchange numbers with him tomorrow, though.

When we get to the dorm, Stef tries to use her card to get in, but she’s holding it backward. She’s basically the car- toon stereotype of a drunk person. Paisley helps her out and we enter the building. I stand and wait for the elevator with them.

“It really was,” she says. Stef tugs on her arm, pulling her into the elevator.

“Night, Bart,” she says as the doors slide shut.

It takes me a second to process, and when I do, I almost hit the up button to stop the elevator.

“Did she just call me Bart?” I ask the empty hallway.