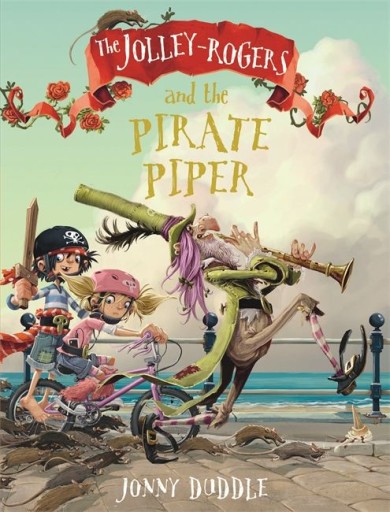 When rats take over Dull-on-Sea it is up to Mathilda, Jim, and of course Nugget to save the day.

I was just super excited when I saw that this series would have a new book! I adore these stories they are just such a delight. How can one resist pirates? A girl with a big attitude and a love for adventuring? Humour? And of course the occasional treasure (I for one would love some treasure in my life).

This one was a fun read as it is a pirate retelling of Pied Piper of Hameln. Only instead of Hameln being a pretty OK guy from the start and then betrayed by the townsfolk this one is a pirate who scams people. He has his own bunch of rats and sets them free on unsuspecting towns. As chaos erupts he appears and demands money. As with the pied piper this guy also takes the children with him. I don’t see it as a spoiler, you know it is the pied piper story and anyone who knows it knows what is going to happen.

The rats were big, huge, and well scary. OK, I love rats so I also saw some cuteness in them, but I can imagine that seeing hundreds and thousands of them pop up gets rid of the cuteness. 😛 I loved how fast they managed to wiggle their ways into the homes and places of people. Just hours ago this town was free of rats and now they are really everywhere. Look there is one just in your pocket. See.

Thankfully Jim and his family is in town after Jim’s mom heard about the rats. What happens next is a delightful adventure in which the kids try to save the town, get the children back, and try to trick the pied piper in a very delightful way (truly, I was giggling at the giant plan, and then I gasped in delight when the plan was actually put in motion). What a plan it was.

Oh, and Nugget, Jim’s tiny sister, plans a giant role in this one. That and her awful fiddling (that is the correct word?).

And like all the other books it is once again fantastically illustrated, the illustrations just fit perfectly with this fun/silly/hilarious pirate story. And plus points to the rats! Again, while maybe too many of them aren’t cute, I just couldn’t help but go Awwwww at several of the critters.

Recommended to all, this was a fun pirate retelling of the pied piper of Hameln story with tons of music, rats, and friendship.